A Day In The Life Of The Police- Alexandra Jones

Title- A Day In The Life Of The Police 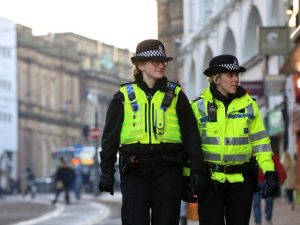 Cue- Being in the police is what many people dream of doing, so look at TV shows such as Police Interceptors or Traffic Cops as inspiration or encouragement. With 20,000 new officers planned for 2020, many people will be thinking of joining the front line in the UK, however, how accurate are these shows and do they reflect real life policing in modern day Britain? Alex Jones spent the day with Thames Valley Police and South Yorkshire Police to find out more, and see what policing in the UK is really like.

Back anno- What do you think? We would love to hear your thoughts and whether you think Policing is anything like the TV shows. Get in touch via twitter @BBCSheffield.

“I have chosen to do my audio project as a documentary on a day in the life of the police, it is a 15 min documentary about what being in the police is really like. I have used South Yorkshire Police as an example in my documentary as well as Thames Valley Police, I believe this may be of some interest for you as the managing editor of BBC Radio Sheffield. The documentary will look into what policing is like in the UK and whether it is anything like the TV shows like Police Interceptors for example.”- email sent to BBC Radio Sheffield for commission.

When I spoke to PC Bernes from South Yorkshire Police, he suggested that every day policing is in fact very different from the TV shows. When I spoke to him after recording the documentary, he said “nobody wants to see an officer do 5 hours of paperwork after a job, the audience wants to see the dramatic footage of what they get up to, such as chasing a shop lifter, its far more interesting”.

I have chosen BBC Radio Sheffield as my commission as I have used South Yorkshire Police as an example in my documentary and with 20,000 officers promised for 2020, it seems like a relevant topic and something local radio may be interested in. I also used Thames Valley Police as another example in my work so using a local station would also work as it has a point of view from this area.

The reason why I want to produce a documentary on this topic is because policing is a topic that people may not know much about, and I believe it is important to educate the audience on what the police do on a daily basis. I was lucky enough to travel and spend the day with two police forces, showing what life would be like in two very different places, this being South Yorkshire and Buckinghamshire. I think having a northern and southern example widens the audience and would be interesting to a wider and bigger audience.