For this module, I am in Team 3 with Phoebe, Tabz, Zalika and Gabriel. My role in the group is Studio Manager. Our script is ‘Terms and Conditions Apply’ by Ben Rawson-Jones.

We first had a meeting to discuss the script as a group and set up a group chat to communicate outwith class times. During our meeting, we noted the different locations in each scene and which props may be needed. We also looked at which sound fx we would need to source/create for each scene. Tabz played us an example of a track which had bits of music and sirens, wind, etc. that he put together which sounded really cool.

Phoebe and I decided on a few scenes we wanted to practice in the studio, having other members of our class reading the script. It definitely helped us figure out the set-up for the real day of recording with the actors and how we were going to record those particular scenes. Unfortunately, not all of our team members could make this recording session but I sent them recording in our group chat later that day.

I organised for us to meet to go through the script again before our recording session with the actors. Unfortunately I could only stay for an hour due to already having organised to go elsewhere in London to work on something for another module, but while I was at the meeting with Phoebe, Tabz and Gabriel, we listened to the actor’s show-reels and discussed what kind of accent each character should have. We also organised who would bring in props and which ones we could just get from the kitchen in the Radio block. I volunteered to bring in clothes and hangers for a scene. Once I left the meeting I kept in contact with the team via our group chat while they organised the recording schedule.

I feel alright about the recording session next week but I’m a bit worried about the absences and lack of communication from particular people in the group. 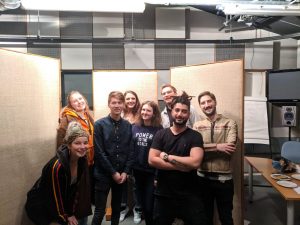 We talked about the need for hard flooring and made sure everyone was still able to bring in their props. The group (apart from Zalika) met in the morning before the recording session to prepare and adjust the recording schedule slightly. We also talked about Gabriel doing the credits and recording the Foley after the recording on a different day to save time.

During the session, I was in charge of the actual recording and using the desk. This went ok but I found it frustrating at times when I was having to tell our director to press the cue button and communicate with the actors at times via talkback and so that they knew what was happening, a couple of times I had to do quickly speak to them via talkback before a scene or just after. I came up with the idea for Tabz to hold a chair sideways so that the hangers would sound like they were on an actual rail in the wardrobe which I think was a good improvised idea on my part. I think that overall the recording session went well with the challenges we faced (like having one actor in the booth at all times, recording parts outside while our indoor actors were listening to them via our phones). We ran over slightly but this was more due to the complexity of our set-up, with having to go outside for a few scenes.

Phoebe, Gabriel and I met to put all of the scenes in the correct order as we hadn’t recorded it that way. Zalika was present for about 15-20 minutes but did not assist with any editing. Tabz couldn’t make it that day but we sent him the audio afterwards so he could work on the music he was creating for certain scenes.

We (everybody apart from Zalika) met again the week after and went through the audio with the bits of music Tabz had created and discussed changes that we wanted to make and sound effects that needed to be added. Gabriel recorded the opening and closing credits for the piece. By the end of the week, Tabz had added some music in and sent Jeremy the first draft.

We (everyone apart from Zalika) met the day before the deadline to do the final part of editing. We added extra sound effects, made changes to vocal effects from previous editing sessions and Tabz had made extra music for us to listen to which we added in.

Overall I have enjoyed the process of creating an audio drama and I think the members of our group who contributed to the project worked well together.