Synopsis- My Individual Audio Project is an educational comprehensive reading and listening audio book task. I have recorded an extract from An Inspector Calls by J.B Priestly and an extract from Othello by Shakespeare. This will help students understand the characters and the plot of the story for their exams. There are questions that will be asked after each extract so that the students will be educated on the content of the books.

Story- The reason why I chose An Inspector Calls and Othello is because the stories and treatment of the plays are completely different, so this allowed me to show the differences of the scenes. Both scenes from each book are tense and dramatic. For example, in An Inspector Calls it is the scene when the Inspector arrives and in Othello it’s the scene where Othello when kills Desdemona. But they are very different in the way of speech and style. This is why in Othello there are fewer sound effects as the language needs to be taken in and understood as it is spoken in traditional Shakespearean language but in An Inspector Calls there are multiple sound effects, this is so the students will be able to visualise the scene and the characters in their heads.  This will keep the students interested and wanting to listen to more of the book and hopefully will allow them to remember what has happened in the scene easily. So, they are ready for their exam. Bringing in the education aspect of the audio book, I created a worksheet that the schools will be able to print off and hand out to their students, so they can turn this audio book into a fun classroom activity. As you can see from the worksheet and listening to the audio book itself the An Inspector Calls questions are slightly easy than the questions for Othello and this is down to the academic level of each book. As An Inspector Calls is for KS4 (GCSE students) and Othello is for KS5 (A-Level students). So, I wanted to make sure that the questions weren’t too hard nor easy for but just right so that the students would be able to remember the answers, allowing them to use the information in their exams to get maximum marks.

Treatment-The Treatment of the sounds that I used changed during the course of editing together the book as I wanted to bring in loads of different sound effects so that you could hear everything that is going on in the scene but when I came to actually putting the sounds in I found that it wasn’t appropriate to have the same sound effects throughout or in every part of the scene as it would be better to have fewer sounds but better sounds that convey the scene correctly.

In An Inspector calls the first half of the scene you can hear many different sounds such as knifes and forks on dinner plates, pouring drinks, footsteps and tense music playing throughout. But when the Inspector gets introduced to the scene, I wanted to bring in the effect of pathetic fallacy, which means that the mood of the scene is also portrayed through the use of weather. This happens with a loud thunder strike and immediate rain when the inspector walks in. This suggests that the scene that is about to take place will be dark and moody. I removed the music bed and only had to sounds of the rain from outside throughout the rest of the scene for An Inspector Calls due to the tense environment which plays out. Along with a sip in which the character of Birling takes to elongate his answer about knowing the mysterious girl who has just ‘killed herself’.

There aren’t many sounds in the extract from Othello and this is due to the nature of the scene, because it is an intimate moment between Othello and Desdemona when Othello confronts her on her alleged cheating. I added in the sounds of the door opening and the curtains being drawn when Emilia enters the scene as well as putting an effect on the first few lines that Emilia says to sound as if she is outside of the room as she is searching for Desdemona. I panned the voices of each character to make it sound like they were on opposite sides of the room.

Tweet– Are you struggling with your GCSE or A-Level English exam? Can you remember all the key quotes and characters from just reading a book? If you’ve answered no to both those questions, then I’ve got the solution for you! Why not try a comprehensive reading and listening task in audio book form? I have created a very memorable and fun way for you to remember the info that you need for your exam! Just listen and complete the Educational Comprehensive Reading and listening Audio Book Task and you’ll be on your way to conquering your exam!

Cue– GCSE’s and A-Levels are a very hard time for students, definitely when you have to memorize quotes and key characters from the English books that are set. William Hambidge has created an Educational Comprehensive audio book task to help these pupils.

Back Anon– That was an Educational Comprehensive Audio Book Task with extracts from An Inspector Calls by J.B Priestly and Othello by Shakespeare narrated by Tom Fletcher, Atalya Atherton, Regan Newman, Katy Bloxham and Georgie Smith. 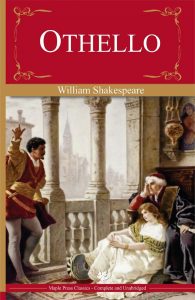 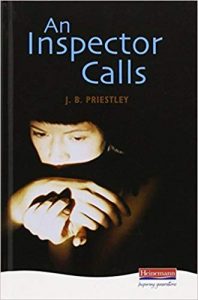 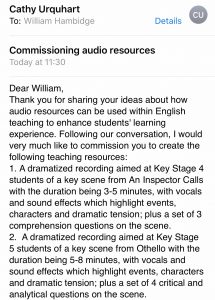 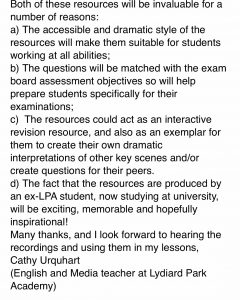