This week was mainly about finding my feet and discovering the kind of audio I want to make, The module for me is a way of experimenting and pushing myself to make a unconventional piece of audio, focusing on radio art or immersive art rather than making a piece to be broadcasted.

I have had a meeting and further discussions over email with Taylor, a curator and education co ordinator for the white chapel gallery, to ask if she thinks my work would be the kind they would commission theoretically speaking. I explained the work would be in conjunction with Instagram illustrator ‘Pink Bits’, to create an immersive are experience, to promote and celebrate LADIES. She seemed interested and agreed that she would be my commissioner, So I am just waiting for a written confirmation. 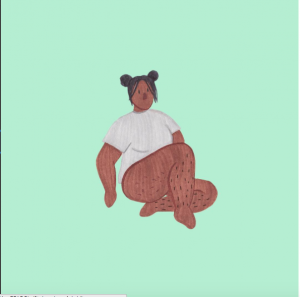 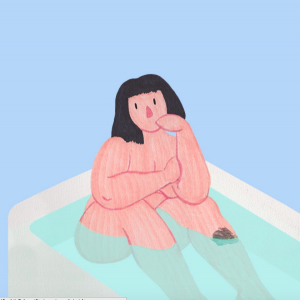 I have also had contact with the creator and illustrator from ‘Pink Bits’, she doesn’t use her personal name and goes professionally by ‘Pink Bits’ so there is a bit of confusion there. She was real;y pleased to hear that I admire her work and is happy to use it as a reference and I can use any published work. 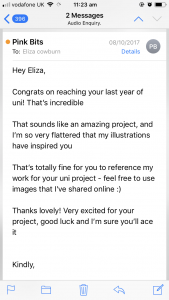 Over the last few weeks I have mainly been working with my commissioner to underline exactly how my audio and concept will fit into what they are asking, Fortunately my commissioner has allowed me to have a broad brief from them, meaning that as long as it reflects or is stimulated from art it is viable.

I want to design my audio in a way that it can fit two different circumstances, The first being a mixed medium piece  in which I distribute the audio as a podcast in association with the white chapel gallery, which can be listened to independently or whilst walking around the exhibition of ‘Pink Bits’ illustrations. Or as a digital piece in which the audio accompanies a digital video or blog format of the art.

I want to do this because the art can already stand for itself, and I want the audio to do the same, I require the audio to be just as colourful and detailed as the art work.

Apart from this planning I have also been writing the actual structure of the audio, as it is a long passage of words (Almost a monologue) that I am writing myself, I have been outlining timings and what kind of sound I want to create. It is important for me to use music and reference pop culture in conjunction with the female power movement in music, Which will accompany 10-15 female voices including my own. These voices will be a eclectic mix of age and accents, and I am also Hoping to experiment with language as well. I have already arranged around 7 of my contributors which so far include actors, musicians, women’s rights activists along with members of the general public who I have met and thought they have an interesting story and voice.

My pitch writing is coming along nicely, but am just waiting to nail down my final elements before committing to every detail.

This week I received my commission, which is a relief and I had a follow up meeting with Taylor (my contact at the white chapel) to discuss my final idea and approach to the audio, she seemed really happy for me to go for more of a experimental approach with the audio using music and lots of different voices.

I talked to her about writing with a poet to write the opening of the piece, and she was happy that I was working with lots of different mediums of art and pop culture.

I also have contacted all the contributors that I am hoping to work with.

I met with a group of girls this week to record some audio, more of a discussion which is going to be cut an edited to music. As it is an experimental piece I really don’t want it to be traditionally edited, I want it to be artistic.

This week I also attended a gig for the artist ‘Sampa the great’ who is a Australian singer/rapper who is known as a feminist activist. I actually managed to have a chat with her and she has allowed me to use her song ‘F E M A L E’ for my piece.