It has been said that different forms of poetry have existed for thousands of year. In fact poetry isn’t like other kind literary work. We can’t trace it back to a specific time period, But one thing is for sure that poetry has been able to travel and progress thought time, evolving each step of the way. I wanted to explore the world of poetry, to find out why it has been able to progress the way it has, to see how it has merged into culture in recent years and to find out if poetry still has power in 2016.

IN: (Music) ‘Poetry, Literary work in which…’

My Digital story follows a educational journey into finding our where Poetry is present in 2016. I chose this subject as it is something I have always had interest in, but don’t really know much about. I wanted to provide an easy little recap, to show the process of page poetry evolving into performance art. I actually interviewed around 6 different contributors, Including Phoebe, Aisling and Ben (Loyle Carner) who are the interviews included in the final piece. The other interviews included two other rapers, Vox pops from a spoken word event ‘Tongue Fu’ and one other spoken work artist. I chose to pick just the three because I felt they were the people who were most invested in the evolution of poetry, they had passion about where it has come from, where it is now, and where it can go. In every interview I suggested to meet in each contributors creative space, Which will explain the real mix of background noise. This did end up being a challenge for me but I actually felt it gave ambience and you can recognise each place is different.

My other big challenge, other than the visual’s which I will come onto, was timing. I was set on having a narration throughout and obviously Interviews, But the problem was that all the contributors said such great things I really struggled with the compromise.

The visuals are what I think really pulls the whole piece together, I wanted to do something that keeps the piece light hearted, keep it in tune with the kind of audio I am producing. Therefore I went with a mix of 2D stop motion, time lapse and Graphic tablet animation. I used 2d cutouts more when talking about the past and as we transitioned into the current day, I introduced technology like Ipad’s and the digital work. This is probably one of the most challenging projects I have edited and looking back on my process I probably should have made things easier, But that being said I really wanted to challenge myself with this module and I think I did exactly that.

I unfortunately didn’t take many picture’s during the filming, All of the pictures of the contributors are taken by myself. 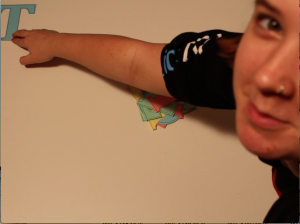