This week we have been discussing what is meant to be in an audio drama and what it needs to include to make it a good one, including the use of of different types of sounds, silence and music. We also went through the roles that would have to be taken up throughout the production of our drama. Alongside this, the scripts that would be used were read through, looking at both comedies and darker stories, including historical pieces.

We have been not put into our groups for the whole production process. Our group is called T-Rex Production and we have been given the script “Theo and Tat Against the World”, which is a good, light-hearted script. The group I am in is also light-hearted and we all preferred the comedy style script, so I feel that this will work well.

In the group we have Simon who is the Studio Manager, Afia who is Director, Natalie as the Producer, Adam as the Production Co-ordinator, and I am the Script Editor. As a group we are organised and seem to have the same vision as to how we want it to sound. I wanted the role of script editor as I am keen to have a say in how it sounds and feel that the team will have the same vision as me. We are also the first group to record and the first to hand it in, which I feel will motivate us to do a good job.

This week I went through the script for the first time and immediately started making changes and additions. For example, there were certain words that we felt the characters wouldn’t say and just sounded a bit too scripted when read aloud, so we swapped them for similar words. We also added a flashback scene with Theo and an old love interest Kieren as we felt it would add to the sound quality and would give a bit of context to the listener, as it isn’t very often that someone just walks into a bar unannounced and just comes over, says “Hello” and leaves, so we wanted to signpost it a little bit for the listener about what happened that night and why it is so awkward between them. Also, I initially added in an inner monologue voice for Theo, as the group and I felt he was the main character of the two and that it would be nice for the listener to have a little bit more knowledge of him and the surrounding activities.

After the initial changes that we made, I emailed the writer James a list of what we would like to change, to see if he wanted to make the changes himself, or whether he was happy for me to do so. James emailed back swiftly saying that he was happy with a lot of the changes that we made, but some of them he suggested other changes for. The main thing that we wanted to clarify from this was the relationship between Theo and Kieren, as we didn’t want to give the wrong impression to the listeners, but he was happy for us to keep it as a one night stand situation, which is what we had all initially thought it was.

When changing the script, I made sure to email James with every new edit to ensure that he was happy with our work, as we didn’t want to butcher his. When I did this, I made sure to highlight all the definite changes in yellow, and all of the possible changes in grey for the group and James to look over as although it is my final decision with the group, I want all of them to be happy about what we do as we all have to work on it together.

This week the group met on the Wednesday as we needed to finalise the script. When we did this, our group also had a full read through of the script to check the timings of it, as we are aware that we do have a time allowance of 10-12 minutes. When we did this, it timings came to almost 15 minutes, so as a group we spent the time to cut out and change certain parts of the script, but without taking away any part of the story. As the script editor, all of the cuts and changes have been my overall decision but done with the groups approval as we are all working as a team. We didn’t have much conflict when it came to this as we were all on the same page about what needed to go. We also emailed the edited and cut down script to James the writer, who said that when he read through it he couldn’t even notice that it had been cut down which made us feel a lot more confident about doing this. He did make some other suggestions about the relationship between two of the characters Theo and Kieren which we did also change as we didn’t want to consistently change his work.

From Wednesday to Friday, I completed the final edit of the script and made a completely separate one for the actors as did not need any of the directions on their copy. I also filled out the front page of the script and attached it ready to be sent off on Friday morning to all of our cast actors. I did this as well as include the groups appreciation as we are aware that they are doing this free of charge so we thought it would be nice if we sent an email ourselves explaining this, but just afterwards I was informed that the other group who we are meant to be cross casting with, had in fact decided to try and cast someone else. This was an issue for us as the person who they were trying to recast was their main character but our taxi driver/exec character so it meant that if she did reply she would only be coming in to read about five lines which was a complete waste of time, but as I mentioned we were not even told that they were thinking of recasting, as I wouldn’t of sent an email containing the script and all the extra details about location and time of arrival etc. We are currently waiting to hear what the other group are doing, but it is not good that we will have to email this person to tell them they are not coming in, especially when they may have turned down an offer of paid work for this.

We also had a 30 minute run through of Scene 5 to test the microphones and the acoustics of the room that we are recording in. In this run through, it was decided that on the day, I will be in the recording room helping out with adjusting microphones, moving screens, and collecting props, as we found that 3 hours really isn’t a long time to record our audio, but it was good practice for the studio manager, director, and producer to see how everything works.

I also volunteered myself to introduce the play and read that script, as my job is now technically done and I don’t want my group stressing trying to find someone else to voice this bit, so I don’t mind doing it early Friday morning before the professional actors arrive.

However, the script has been finalised, checked with the writer and the producer, and has been sent off ready to be recorded on Friday.

After the script was finalised and sent over to the actors, I spent time numbering each phrase of speech on the final copy ready for the day or recording and then we were ready to record.

On the day of recording we all came in early to make sure we had everything ready, and I’m very happy that we did as the microphones had not been set up at all in the room, which was a bit disappointing as we had not been told/shown how to do so, which meant we couldn’t even test them out ourselves before our actors got here. We also had a few issues with the scripts with people changing the names and the role names without contacting me as that’s my job, so when they were all printed out and given to the actors, some of them had different roles than they had been sent off. It was frustrating as all someone had to do was contact me and inform me of the changes. This also meant the scripts were printed out wrong, so on the day I was only able to print out enough of the correct copies for the actors due to the fact that the university would not print them out for us and they were 13 pages each, the production team and the actors had different scripts. However, this ended up as not too much of a problem as when we were recording it was done in chronological order so if retakes needed to be done, the actors and the production team were able to liase easily.

On the day, I spent the recording time in the room with the actors and I was making notes on the script by each phrase of speech, so we could mark for definite that everything had been recorded. I was also able to help out with any confusion with which part of speech we were going from when recording. Also, I was just able to talk to them and explain how we felt it would be sounding and to be able to bring in props when necessary.

From the perspective of outside the studio hearing the production team on talkback, it seemed a bit unorganised and people being unsure of what the schedule was with the production co-ordinator and the producer only appearing to be sticking to their roles. The director and studio manager seemed to be having a few creative issues which should’ve been ironed out beforehand, so sounded a little bit unprofessional with me sometimes having to walk into the studio to remind them that the actors could in fact hear what they were saying.

Apart from that, I feel that the recording went well and that overall our roles worked, considering the turnaround that we had to produce this in.

Snow day so no lesson this week.

This week Simon and Afia have been busy editing and from what I have heard it sounds so good, which is pleasing considering the issues that we had during the recording. We had a meeting with our course leader as well to discuss these today which went well. Also, I have been nominated in the group to voice in intro and outro of the drama, which I have recorded under Simon and Afia’s supervision and with the script written.

This is the final production week for our group to finish off our drama. Simon and Afia have  been really good with making sure that everyone gets a listen into what it will be sounding like and take a lot of the suggestions made on board, so it really feels like a group project. I got to listen to the final audio the whole way through today and it sounds amazing! Exactly like I imagined when editing the script. We all agreed on this and waited for module leaders feedback and then Adam sent it off to the actors and I sent it off to James, who came back with a very lovely email which is pictured below. 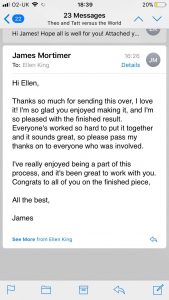