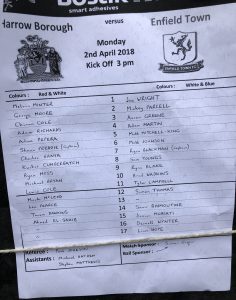 Harrow Borough secured their spot in next season’s Bostik Premier Division after a thumping 5-0 win over local rivals Enfield Town, with 2 second half braces from Kurtis Cumberbatch and Ryan Moss, as well as a nicely crafted goal from Shaun Preddie. The reds picked up all 6 points available over the Easter weekend, beating 12th placed Merstham 1-0 on Saturday afternoon.

Despite the scoreline, it was Enfield Town who dominated the first half of the match, with the majority of the chances going to the visitors. Although it wasn’t until after the half an hour mark Enfield Town saw their first major chance on goal with a corner swooped in from the right hand side, Boro goalkeeper Melvin Minter fails to deal with the cross, with the rebounded shot blocked by Chinoa Cole in the Boro defence. 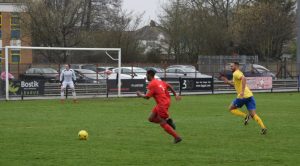 Enfield piled on the pressure and were the side who were threatening to score first. A cross from Enfield captain Ryan Blackman from outside the box on the right hand side was messily dealt with by Boro goalkeeper Melvin Minter but was cleared away by the Boro defence. Harrow’s chances in the first half came few and far between, Charles Banya had a chance skewed over and wide of the left post just before halftime.

This game really was a tale of two halves (sorry for the cliché), Harrow took command of the game from kick off, following a formation change during half time. Kurtis Cumberbatch scored the first of his 2 goal brace shortly after kick off. A Boro free kick wasn’t dealt with by the Enfield defence, Kurtis Cumberbatch picked up the ball from the deflection, drove at the goalkeeper and slot the ball past him on his near post. 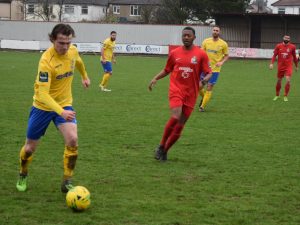 Enfield applied the pressure immediately, but Harrow hit back on the counter attack and quickly made it 2-0.  The ball was cleared out by the defence and picked up by Mark McCloud on the half way line who broke free of his man and ran free on goal, the ball of shifted across to the left to Ryan Moss who passes it across the box to Kurtis Cumberbatch, beating his man on the inside of the box and caresses the ball to the goalkeeper’s left.

3 minutes later, Boro’s clinical finishing made it 3-0 to the home side. A corner from the left was easily cleared by the Enfield defence, but the ball fell to the feet of Charles Banya, who knocked the ball to Shaun Preddie who had made a run into the box, poking it past the Joe Wright in the Enfield goal, who managed to get a touch on the ball but couldn’t keep it out.

Enfield kept piling the pressure for their first, but the chances just wouldn’t fall for their forwards, who had a shot cleared off the line by Adam Richards following a deflected shot by goalkeeper Marvin Minter, who came out to block the shot from Enfield forward Ryan Blake. But it was Harrow’s clinical finishing in front of goal which proved lethal yet again as Ryan Moss netted his first and Boro’s fourth 8 minutes from time. Harrow hit Enfield on the counter again, from a similar situation from the second goal. A free kick 35 yards out was cleared to Ahmed Elsahib on the half way line, moving the ball over to his left to an oncoming Tarim Dawkins, who drove into the box and crossed the ball over to Moss who slotted home to the goalkeepers right. The goalkeeper who was sporting an all white kit wasn’t looking so clean by this point.

And before the final whistle and in the final attack of the match, Ryan Moss bagged his second and Boro’s fifth, the first time they’d won 5-0 since August 2015. Ryan Moss was fed a simple ball from Michael Bryan on the edge of the box, who could do nothing more that slide the ball passed a dismayed Joe Wright between the Enfield’s sticks.

Harrow are now mathematically safe this season but won’t be looking to rest on their laurels as they welcome current strugglers Lowestoft Town to the Roger’s Family stadium on Wednesday night.

Steve Baker also talks about the club pushing on for a higher finishing position after being confirming safety from relegation following their win.