I went to town researching everything I could about the women who created the Pink Protest and who kicked off the #Girlswanktoo campaign. I discovered that founders have just released the number 1 selling book called ‘Feminists don’t wear pink and other lies.’

So I have began to contact them and so far I had 3 positive responses. 2 from founders and 1 from a illustrator who was involved in the project. These interviews will hopefully be taking place in face to face from the week of 22nd October.

I am confident overall as, so far my contributors are confident speakers as, they have been featured in a lot of press coverage. So I am positive that the doc is starting to shape up.

When researching period poverty as part of my preliminary idea, I came across a community of activist’s called the ‘Pink Protest’. They had ran a campaign earlier this year called #Girlswanktoo. After reading this quote on their website: 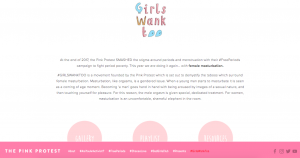 … I knew I had to explore the stigmas surrounding female masurbation. Aswell as exploring how the #Girlswanktoo movement was created and the ways in which we can break this taboo within society.

I thought about approaching a London based audio production company to see if a, Radio 1 style documentary would suit this project. As well as seeing if they would read my pitch for commissioning. Luckily I’ve done some work experience over the summer at Wisebuddah, so sent a email to a documentary producer there.

After my research I began to look for inspiration from sources around me. I used Ideas from work as a starting point, as I knew I would enjoy researching those themes further. I am part of the production team on the ‘Badass Women’s hour XL’ and they speak a lot about all female organisations and movements.

I then took inspiration from influencers and accounts I followed on Instagram, to potentially create a peice around the theme of period poverty or body positivity.

After reading through the brief, I knew I wanted to focus on a longer and more traditional audio piece, so I decided to go down the Documentary / Features route. I believe I could make a professional sounding audio documentary with the tight time limit of 10- 15 minutes, without the doc feeling boring, dragged out or lifeless. I’m a big fan of audio documentaries / on demand content, so I feel this module will be beneficial to my portfolio work for after I graduate.

I have done some research to see what other audio documentaries are currently available on the market and had a listen to how they are formed within production style. Here are a list of current providers and a few examples of long form audio that I really enjoyed listening too: