Today was finally the day of our live show and i arrived early at 8:30am to make sure that we were all ready to go. I checked the running order which I had created a made a few final changes. I also worked on giving Jason the last few Idents and music beds to put into myriad for our presenters.  I had created a few more Idents for imaging as, a comment was made during our pilot that more could have been used. Therefore I made sure that our news had its own imaging alongside, every feature and that we had generic show branding.

While the OB team did a fab job at setting up our live space, i made sure that my presenters had everything printed out that they possibly needed. As well as this we decided to pre-rec our competition caller, so we had more time to focus on testing the line for our OB. The start of the show went well, apart from one small mistake with the news but apart from that the presenters opening link sounded very slick.

Throughout the show I made sure that we were on time and helped to tell my presenters what to included in crunch and rolls ect. (promote the socials, competition, the Juicebox or features). I felt that we worked well as a team in studio and had a great balance of fun whilst we made the show. Overall i was impressed with the whole teams effort and i think it sounded as amazing as, it did look visually.

This week was the pilot week but, prior to this we all met on Monday morning to have a run through.

The main issues that popped up during this was that we ideally needed the adverts and imaging to be put into the myriad system, to make it easier to time how long our presenters would have to talk in each link.

Therefore after the pre-pilot i went off and was in charge of making all of the Refresh London imaging. I was sent the raw VO and started to cut the clearest versions of her saying slogans and features. I then spent a whole afternoon editing the clips with urban sounding music beds and sound effects. I really liked the finished sound and felt it shaped refresh london well, in a way that represented the ‘Real Breakfast show’.

On Thursday morning of the pilot we all met early and made sure we had printed the running orders, clocks, and notes for the presenters. We started off well and didn’t have any major problems. I personally think that our run through went well and we learned where we needed to shape things ready for next week.

We need to work on pushing socials more as, in our feedback we didn’t make this clear enough. So as a producer I really want to make sure the audience have a ‘call to action; and can find our social pages easier. Especially as our competition and feature ‘the showdown’ is based around listener participation. I also want to make sure that our imaging continues to sound as brilliant as it did. Our feedback was good regarding imaging but, would prefer us to try and use a mixture of voices. So i will work on that during the course of the week, while the rest of the team work on getting other parts of the show ready.

Today in class we started off with a briefing with Matthew to discuss our progress so far.

After showing him our running order and some ads, we then went off and worked on our departments.

I focused on the clock as we needed myriad to create the running order of songs for us. (Jason inputted all A,B,C and core songs into the system). I worked on moving the ad breaks to 20 / 40 past the hour and decided each break would be 3 minutes long. Therefore that would give us 12 minutes of ads throughout the two hour program. I also decided with the team that the live ob (named the juice box) would take up 12 minutes as, we want our artist to play 2 full songs and have a decent amount of time for a interview.

During the week I edited the VO audio for the imaging , although after a discussion with the team. We felt that we needed a mixture of urban voices, to really represent a London sound. So Kaylee found some people who matched that criteria and will re-record the VO, for me to edit during next week. I will work on finishing a suitable sounding bed to and will add sound effects to make the imaging sound fresh.

As a team we decided to have a practise on Monday as, we want to figure out what works and what doesn’t, before the pilot.

I started to work on a brief running order/ clock as, it would give us a basic idea of how we could started adding features, imaging and songs to form our two hour show. I worked with our ‘Head of music’ to decide what sort of music rotation we would work with through each hour. I also had to work with the news team to discuss how long each news bulletin would be as, well as discussing with the ad team how long ad breaks would last.

I thought about other commercial stations and how each advert breaks tends to be 20/30/40 seconds long. So as producer i thought tactically as my presenters would probably want to take breaks ranging from 2 ½ – 3 minutes long. So i would like to have at least three ad breaks an hour.

Due to an emergency appointment i had to leave the session early, although Jason recorded some raw audio with our VO artist. This was then sent to me to edit and pick the best bits, in order to start creating ‘Refresh London’s’ imaging. I have also used a site called ‘beds and beats’ (http://bedsandbeats.com/) to look for an appropriate sound/ feel.

My next task is to finish the ‘running order / clock’ but, i will have to continue working with the head of music to get the correct lengths of our chosen playlist. As well as developing our two features that our presenters would like to do.

Over the past few weeks myself and my group (group b) have had two production meetings and healthy communication throughout our facebook group chat.

I put myself forward to be the producer of this live music show as, i have worked hard over the past few months shadowing industry standard producers and have seen how they organise a live shows. It’s a task that i feel i can take on as, i work well with my other team members and feel like i have had good industry practise.

I’m really proud of our group effort so far as we have agreed on a theme of ‘new urban music’ which will help to promote new and upcoming london based artists. We have also agreed on a name which i suggested of ‘Refresh’. We then decided to add ‘London’ onto the name, in order to keep in line with our theme. So that how ‘Refresh London’ was born. We have since all added ideas and suggestions to music, adverts and imaging choices that we would like to see.

So moving forward we are working with our VO artist to create exciting imaging and branding. We have also started creating our social media pages and wordpress website. As the producer of the show, my next task is to sit down with the editor and presenters, to discuss what features and competitions we would like to add to the show. As well as working with our head of music to start putting together a very ‘rough’ show clock together.

(See below the logo ideas created by Jason Kundi) 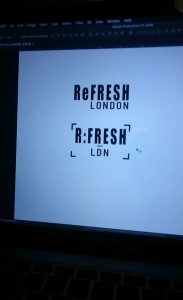