Individual Audio Project- Battling Through: The effects of War- Matt

I am Radio and Digital Production student from the University of Westminster and I’m currently doing a project that requires me to produce an audio piece for a charity.

Upon doing research on SSAFA, I thought an interesting idea for an audio piece would be to create an audio drama exploring three different effects of war: mental illness, physical illness and death in the family. I have attached the full brief in this email.

I am not looking for any funding, just written confirmation that you would be happy to use my work as a promotional tool for your charity if you feel fit because it is part of the criteria of the assignment to get a commission.

If you have any queries, please feel free to email me and I will provide more information regarding the project.

Hope to hear from you soon, 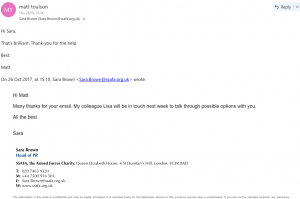 Three emotional audio dramas that will explore the effects of war through the inner thoughts of those who experienced it first hand.

This audio piece will explore the effects war has on its personnel and their families focusing on three major themes: mental illness, physical illness and death. SSAFA, a war veteran’s charity, help with all of these problems. Using real life diary entries and newspaper resources, a dramatized account of the personal feelings of those who experienced it first-hand will highlight the true horrors of war over three generations ranging from the first world war to Afghanistan.

Arthur Hubbard was a 20-year-old WW1 soldier that was recovering from his injuries in a convalescent home when he wrote about his experiences of war in his diary. He was injured when he ‘went over the top’ but it is more than his physical wounds that he is bothered about. Arthur suffers from Shell shock, as it was known in 1916, but because mental illness was not understood as it is today, it went largely untreated. In this first story, Arthur’s injuries keep him awake at night. He talks about his homesickness, experiences in war and his frustration at his mental illness not being treated seriously. This will be a dramatized account using the diary entry of a real life Arthur Hubbard.

It’s VE Day and Elsie Carter is celebrating in London. She later recalls in her own diary that a gentleman bought her a drink in a pub in Whitehall. Elsie was kitchen staff in a Rehabilitation Centre in South Africa. War affected Elsie so much that she became a pacifist. She talks about her relationship with the international soldiers in South Africa that came from all around the world, and one particular American soldier that hit home why she thought war was devastating.

This final audio drama will take a more bittersweet tone than the last two. Some mothers who lost children in Afghanistan were encouraged to write letters to their deceased love one. This unnamed source says she wasn’t happy to leave a letter because she felt it was the right thing for her to do so she left him a voicemail on his phone instead. The mother talks about life back home and how she misses her son. She then ‘tells’ her son about the day she found out her son wasn’t coming home and how the family reacted to it. She also reads a letter that he left her in case he should die.

These three audio drams can be listened to individually as there is no interconnecting stories, but I will put them all together in one 20 minute piece using links to provide context for the stories.

Arthur Hubbard, one of the soldiers featured.