It often feels like there’s a new beauty procedure popping up every day. However, many are still quick to judge on those who do indulge on self enhancement and are even equally as quick to judge on those who don’t fit societies definition of ‘perfect’. This has led to cosmetic procedures such as dermal and lip fillers being normalised, which many blame social media for. Celebrities and Instagram influencers infiltrate our social media feeds daily with their perfect pout, which often leaves young women feel insecure about themselves and in some cases even turning to get lip fillers themselves.

In May 2015, Kylie Jenner announced on her family’s television show, Keeping Up With the Kardashians, that she had been hiding the fact that she had been regularly getting lip fillers. As a result of this 24 hours after the episode aired, google searches for lip fillers increased by 70%, showing how much influence celebrities have when it comes to creating current beauty trends. Kylie explains in an interview that ‘people are so quick to judge me on everything’, her explanation for this is because of current social media culture where we have unashamedly quick to judge one another. These insecurities don’t just affect celebrities but also a vast number of women feel insecure due to comparing themselves to others on social media.

So what exactly are lip fillers? Hyaluronic Acid which is a substance that’s found naturally in the body. It’s a pretty useful beauty ingredient because it can to hold up to 1,000 times its own weight in water, which gives the lips a plumber shape.

However, the search for the perfect pout isn’t so simple, due to the current lack of regulation many women have been left with botched jobs. I spoke to Ellie, a young woman who regularly gets lip fillers however due to the lack of research her first experience ended up being a botched job.

Regardless of what the stereotypes might suggest these insecurities about appearance also affect men, evident as more and more cosmetic surgeons are seeing men walk through their doors in order to receive the perfect ‘macho mouth’, a term given to men that have a strong bottom lip which is the current trend. I spoke to a young male, who wishes to remain anonymous about why he gets lip fillers and why he is humiliated to admit this.

As mentioned above, this piece of audio contains a variation of interviews which help explain this topic from different perspectives. The narrative is lead by me as it gave me the opportunity to introduce and give context into each interview. The piece opens with a short montage of Kyle Jenner admitting to her lip fillers, which was the event that many claim lip fillers started to become a huge trend. Throughout the piece you hear a focus group of young women discussing their major concerns about lip fillers, which includes: the lack of regulation, the pressure social media puts on young women, whether it is acceptable for men to get this procedure and much more. As mentioned above, another interview featured in this piece is with a young woman called Ellie, who has experienced a botched job with her lip filers and explains what made her get them in the first place. Also mentioned above is an interview that is featured with a young straight male, who wishes to remain anonymous that explains the social stigma with men getting lip filers and this interview highlights how it may be socially acceptable for women to have regular cosmetic surgery but equally it’s not as sociably acceptable for men to have the same procedure. The final interview in the piece is with clinician Mrs Karter who explains how there a huge increase in women who have been coming to her for dermal fillers and the reasoning behind this. Karter also explains her concerns about the procedure when it comes to the current lack or regulation. 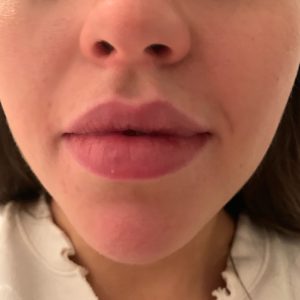 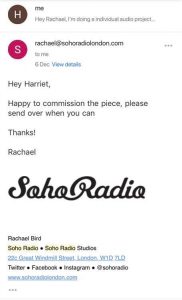 I was able to get Soho Radio to commission this piece as it has becoming a huge trend in the UK with London being the main area to give this procedure. Also Soho Radio has a wide target audience which includes the younger generation, which reflects this issue of how social media can influence people feeling insecure, leading them to turn to social media.

Cue: “when we asked are…

Back anon: “ … doing the treatment for them.”

Tweet: Social media has meant that we are able to feel closer to our favourite celebrities, which has meant we are even able to follow their lifestyle. I did a short audio piece on lip fillers investigating their influence and how safe they are.