To start this final audio project I decided the best way to go about finding a commission was to think about the things that really interest me in life. I thought under the branches of gardening, poetry and art. I liked the idea of poetry as I thought of lots of interesting idea’s based around soundscapes that could be used and poems often tell stories and bring out emotions which would be exciting to illustrate and bring to life through dramatisation. Two companies I thought about using for this were Poetry Prescribed (I have been to a few of their events) and Wax Lyrical (the poetry collective at the RoundHouse) that I have loosely worked with before when I used them for a performance at a festival I put on at the RoundHouse.

Art I liked the idea of after I looked at past audio projects from last years third years. I really loved the one “The Chronicles of Big girl: A exploration of self love and social media. In association with The White Chapel Gallery and Pink Bits Illustrations.”. I thought about doing something similar with an art space local to me at home called the Stroud Valley Art Space of which I have strong ties too. I wanted to do something a bit outside the box.

But one passion I have recently found I am very interested in is gardening, herbology and permaculture. I have been involved in gardening around london before (taking me back to my countryside routes). I have had a change of heart in career and I would like to work in something environmental, so I liked the idea of linking more of my projects to the environment. I thought about using a company called Urban Growth who help build community gardens, as I have met the site manager and orchard and volunteer manager through helping with the plants at PopFarm at ‘Pop’ in Brixton. I thought about doing a feature based on “Edible living in Lambeth”– A project in Lambeth where they help local residents grow their own food in their communal gardens/housing estates with gardening training. But I recently went to an event by a company called Hackney Herbal where I made herbal teabags, herbal bath salts and went on a herb tour. This gave me the Idea to contact them about a project as I really like the things they do.

I thought this company would be perfect for a project and not only is it going to be beneficial for my audio project its also something I could enjoy in other respects. Their Mission is ‘to show people how to incorporate herbs into their lifestyles, for health and improved wellbeing’ and ‘to create more value out of the herbs that were being grown in private, public and community gardens.’ They grow herbs in sites around Hackney, make herbal tea blends and host weekly workshops and events.

I spent a long time looking at their website and their Facebook page, thinking about different angels I could approach putting what they do into audio. I emailed The founder Nat a list of idea’s i had for an audio project, mainly that was linked to the companies main focus, education. This included an audio guide walking through your herb spaces in hackney, Mini ‘Herbal Histories’ podcasts, a feature on Herbs to help you through the colder months, tea blends you can make for winter gifts, podcasts based on a “Herb Map” (put these recipes into stories) or a Promotional piece for the Mental health and wellbeing course.

I didn’t hear anything back from a few days, so I decided to go to a hackney herbal event (A 2 hour permaculture workshop which was super interesting!) on the 11th October talk to them in person. I got to talk to Nat, who runs Hackney herbal and we discussed the project and she really liked the idea. We agreed to talk further about the project over email and we agreed that we liked the idea of the Herb Map being made into stories, and i have sent a further email with more details about the project and the ideas for audio, format and production on the Herb Map stories.

“We think that herbs act as a great way to celebrate diversity and we are always fascinated to learn new recipes and stories from different cultures. We are building a collection of herbal stories from around the world captured through our herb map which comes with us to all our community events.”

My Idea’s for the Herb Maps Project:

For the Herb Maps in particular, this would probably be in the form of a podcasts/discussions/interviews. It could be a series of mini episodes, for example five – 3 minute episodes, each episode having one person telling their herbal story. Or three – 5 minute episodes, if people have longer stories. It could also follow the format of each episode being about one specific herb, but lots of peoples stories about that type of herb. But alternatively the audio doesn’t have to be split up and it could be one long audio piece instead of shorter, linked pieces. All depending on the amount of people interested in contributing.

The episodes could be titled with the name of the person telling the story, or instead the herb the story is based upon. For example, “Sandra’s story” or “Nettles”. It would also be a really great to get a mixture of people from different ethnic backgrounds if possible to give a wide range of diversity. So it could be that each episode is actually based around herbs from one specific country maybe with titles such as “Herbs in India”. Ideally for recording it would be best fitted to record in either in one of the community gardens or in a relatively quite room/place.

In terms of non-spoken audio, I thought that it would be nice to include sounds of the garden like insects, rustling of trees and plants, birds, windchimes, snipping of plants. Then also sound effects to fit what is being spoken about in the audio, that compliments and creates a picture of what is being told to the audience. If the story is linked to a specific culture or country then some kind of music that reflects that would also work nicely.

To find contributors for my piece, which hopefully through the help of Nat will be found through word of mouth and through a Facebook post Nat will create on the Hackney Herbal page asking for contributors. Then after arrange a place and time for different interviews, my next step will be to go and record sounds for a sound scape. I’m excited to start the project, my only concerns is finding contributors in good time. 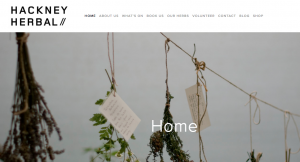 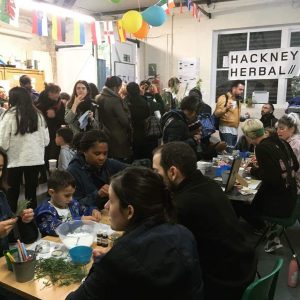 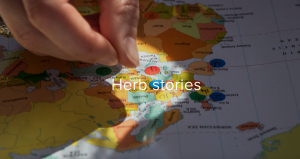 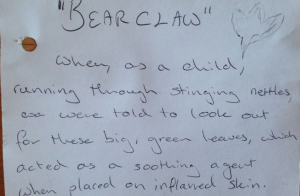 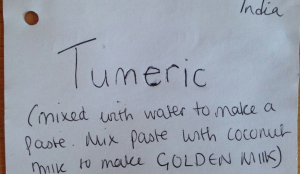 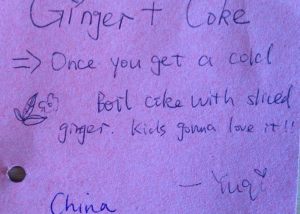 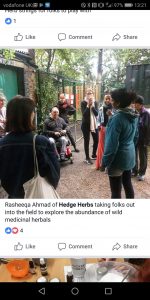 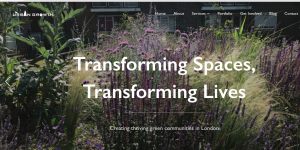