This week we have been deciding what topic to cover for this years pop up station. We looked into anniversaries, events coming up and just general niche markets that haven’t been tackled. Some of our ideas were

We discussed whether the topics had what we needed. For example If there were potential OB’s, Features, what adverts we could use, who our audience would be, Etc. We then decided to go home and think about which our favourite one is and what our idea’s are.

This week we came to class with an idea of what topic we wanted to do, I wanted to do disco as I thought it was a great idea and that it would be fun to do as a project. We got into groups with people that wanted the same topic and brainstormed the potential shows, music features and what we would do with this topic. I went with disco, we decided that the potential OB’s we could have were, Visiting record shops, Going to disco workshops/events, Disco yoga. The music was obvious with the topic being a music genre but, then also introducing new disc music and going with specific music for features like By a certain record label or a certain music producer. After we wrote up a pitch to pitch to the group we got back together and all groups pitched to the class. After the pitches we voted on which topic we wanted. We were left with disco and gaming, at this point I didn’t mind doing wither topic as I thought that both topics were well thought about and both had legs to stand on. In the end we went with Gaming. This meant that we had to decide what roles we were going to have, I wanted to do something different and to gain experience in an area that I don’t have the biggest knowledge on. So I chose to go for either Music director, this is because I have never done it before and I would love to create the music base for the show, or Executive Producer this is because I think I’m very creative and I think I would have a good creative input to the content of the show. I ended up with the Music Director role alongside Ellie, I have now been looking at potential music for the show and looking at different gaming playlists.

We then started collecting to gather all the music that features one the games including Original Soundtracks, Remixes and featured songs. In some cases some games had in-game radio stations that have big collections of music but all different genres like GTA. The initial music base that we made is over 67 pages (On Google Drive labeled Music Base) as we are going to condense it down by going through it with Adam and others gamers that we know, using a key to highlight the potential songs for the music base we also highlighted in the likes of Gold, A, B, and C List this will help us later down the line when deciding what category they should be a part of. We then discussed the music policy and how we were going to categorise the music, how often each category will be played and the target audience.

At the start of this week we had now gone through and condensed the music down to around 150 songs. With the completed music policy and our idea and opinions on how we were going to sort and categorise the music we went through the key that we had made and arranged them into a Finalised A, B, and C list. Once this was complete we started downloading the music to upload on to myriad. Once completed I inputed all the music onto myriad over the next 3 days locating the Intro’s, Extro’s and Hooks. A problem with some of the music was that a big section of the music was explicit but we decided that it fit the station so baring this in mind I sent over the explicit music as Andrea was cleaning the songs and I was uploading it all on to Myriad. 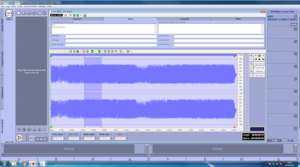 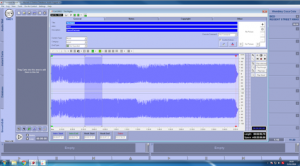 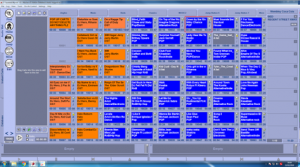 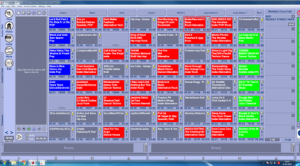 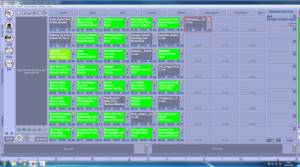 This is the Cart wall of the music that I uploaded. The grey is there so we can just re-add the music that needs cleaned and its in the rights category to make it easier for us. The copyright is currently empty as Andrea is inputing that information.

This week was the completing of the inputing of the music onto myriad, We came to a standstill with it as we were waiting for the music to be cleaned to be uploaded so I could complete the logs and schedule the shows. Whilst waiting I collected all of the specific songs that the shows needed and added it into a table (On Google drive labeled specific music asked for shows) and then added it to myriad ready to schedule the shows. Over the weekend I started the script for my advert that I had been given (Game Gallery) I have completed the script and contacted the voice over artists just need them to reply so I can send over the scripts for them to record it.

Today I came in at 9 so I could schedule the shows with all of the music but, there was another problem in that Andrea couldn’t clean most of the songs so we decided we would just the use the ones that she could and that we already had and just to find some more songs from the same genre that had radio edits. I alongside Callum created a log for each show using the songs that myself and Andrea had put together and the specific songs sent over by the producers of each show with the Ads and Branding.  As this was all last minute as we were at a halt with some of the music it was very stressful so I am going to come in tomorrow to start with the next show logs so that they are done on time to prevent it being done on the day of the show.  Some feedback from today was that some of the songs were to long and not the Radio edits so I am going to go through all the music to double check that they are all correct. I also got feedback that my ad needed somethings added to it so I emailed the voice over artist to add the bits on and reedited it for next weeks show.

We are compiling music playlists from each show that have been sent over by the producers and what we need to do is make sure it is min myriad and add it to the final log for each show.

This week we have finished the logs this morning to make sure it is all in place, but feedback that we have is that we need to put all the music together as it is our role and is kind of being taken away from us. We are going to start sourcing more music from different games and more niche for each show.

Press Play- This show needs to be primarily pop with songs that were released after 2005, this will give it more of an new and upbeat feel.

State of Play – This show will have only Original Sound Track to match the theme and seriousness of the show.

Play Again – This show is all gaming music from before 2005 with that retro feel.

This week we set out finding more music that was more fit for each individual show and from more games and we decided that Andrea would do the logs for the show and I would focus on admin so that we can get it done. We were a behind on the PRS as Andrea said that she wanted to do it as she felt she hadn’t done as much as me as I done the majority of building the music base, Uploading songs onto myriad and all the other documents other than the music policy, but it didn’t get done so I decided to do it myself so it could get done in time. This week the logs were a bit off in terms of segging and having the right audio in the right places so we went over it again in the morning before the show and made sure it was correct with the producers.

This week Andrea and I set out building the playlists for each show and then Andrea will do the logs for each show because its easier and quicker if one person just gets it done. I was working alongside the producers to get the right songs and then popped them on the drive so Andrea can create the logs. I’m still doing the PRS for the music Dan made me a spreadsheet to input all the information then I made a one for each show and week. I also created them for the music used in any packages or adverts that are copyrighted and in for longer that 20 seconds. The mission is to get all of thew admin done before the final week so it can be made into to PDF’s and in the final folder. Matt sat and helped me do a few of the songs for as there is a lot and it gets very tedious after a while especially spending 2 weeks straight on it.

For the final show I helped Eliza PDF and finalise all of the admin to do with music and made sure I completed it all and was done correct. The last thing I done to for pop up station was do the cannons as Lucy couldn’t do it. A big role to take on and under pressure, but I think I done it with great power and aim.