a) The written pitch

SYNOPSIS: A journey to discover how and why one of Britain’s former top predators might be reintroduced.

STORY: Wolf! A word which triggers primal associations with folklore, religion, and mythology, raising spectres of their piercing howl and childhood fairy tales of the ‘big bad wolf’. So why in 2017 would we contemplate the reintroduction of this seemingly mythical predator back onto British soil – for the first time since the 18th century?

Rewilding is a growing movement that wishes to see the restoration of wild nature across Britain. The growing group of supporters, referred to as rewilders, have wide and vastly varying opinions of what rewilding means, from sprinkling wildflower seeds in back gardens, to the somewhat radical belief in the national reintroduction of one of Britain’s most feared former inhabitants – the wolf.

Throughout Europe and America humans have sought to redress past actions which have rid the landscape of predators. This has seen a resurgence in projects to balance the natural ecosystem, but this hasn’t come without its issues. However, with the prospect of Britain’s livestock, domestic pets, and even the public being put in the direct danger of being ripped to pieces, are there convincing reasons for the reintroduction of these creatures or are they best left in the past?

A group of wolf- loving rewilders, believe that free roaming wolves in areas such as the Scottish Highlands, Brecon Beacons and Kielder Forest would lead to a ‘much heartier’ ecosystem. To begin the listener will hear just a few of the compelling experiences the contributors have had with wolves, the use of SFX being used to recreate these special moments. This is a montage programme and this imagery provides the dramatic starting focal point, stories of standing eye to eye with the villain of the piece. At this moment to listener will begin to question if they understand the behaviour and lifestyle of wolves, perhaps contradicting the commonly held views of this creature as a ruthless and vicious killer.

The spine of this documentary will be the Sarah Halls novel ‘The Wolf Border’, which imagines the reintroduction of wolves into Scotland. Sarah is a multi-award-winning author, and extracts from her book will provide the perfect central focus from which further discussion can then continue. These short extracts will be accompanied by music and sounds which vibrantly illustrate the scenes, complementing Sarah’s captivating writing style. As the story develops throughout the documentary, so will the conversation amongst the contributors. The final extract from the novel being wolves released into Scotland, leaving the question is it now time for Britain to do the same?

Zoologists and Geographers argue that despite any long-term ecological benefits wolves might bring, Britain is not currently ready to reintroduce them, and this is simply not practical to Dr Steve Carver, Senior Lecturer at the University of Leeds and Director of The Wildland Research Institute. Dr Carver has spent nearly twenty-five years researching how we can repair and restore the British landscape through natural means. He will outline the benefits wolves seem to bring to a system and provide context on how this would benefit Britain.

Dr Carver is a supporter of the rewilding movement and through The Wildland Research Institute he works on translating research into policies for a transition to a greater presence of wild landscapes in Britain. Dr Carver will discuss whether enough is being done in Britain with regard to the reintroduction of species. Dr Carver believes the English Channel is the only thing, other than policy, separating the wolf population from returning to Britain as large areas of Europe already support wolf populations.

At this point the presenter Professor Tim Coulson, Associate Head of Zoology at the University of Oxford will be introduced. He has spent many years studying the ecological, evolutionary and conservation consequences of the reintroduction of wolves in Yellowstone National Park. Professor Coulson will share his great scepticism that the same model would work in Britain. He will also reveal his work on conducting research regarding public opinion on the reintroduction of wolves, especially in Scotland.

Peter Haswell is a PhD researcher who has worked with wolves for over ten years, he will be joined by Mike Collins of the UK Wolf Conservation trust. Pete’s passion for wolves alongside his thorough and continued research makes him a leading academic advocate for the benefits wolves could play in Britain. Peter and Mike will discuss why they have both devoted so much of their lives to wolf conservation and research. This will lead on to Peter’s research about the benefits he feels wolves can bring to an ecosystem and him revealing how he has learnt to communicate with the animal.

Amongst the sceptics, are 200,000 farmers and landowners who have great concern about their livelihoods, with concerns that a burgeoning wolf population would threaten livestock. The National Sheep Association will also voice their opposition to the process, pointing out the financial implications, for their members, of livestock losses and a lack of accountability for those losses. They are the voice of sheep farmers and they would be most adversely affected by any reintroduction so it’s important they have a voice if eventually they had sharp toothed predators on their doorstep.

Throughout there will be a distinctive soundtrack of wolves, from their cries, howls, and purrs of pleasure, to the wild landscapes they inhabit, with the use of excerpts from Sarah Hall’s novel to reveal Britain’s troubled relationships with wolves. But most importantly, this will be an engaging and thoughtful exposition of the subject – the story of a feared predator fighting for a second chance.

As I found in BBC Radio 4’s commissioning guidelines, they prefer to be pitched a series rather than an individual programme. This is why I decided that I would develop a week’s worth of special short form programmes. My idea for the series developed quite naturally as the idea of reintroducing wolves back into the UK is part of rewilding. I therefore decided I would pitch to the independent production company a series called ‘Rewilding Britain’.

I contacted Whistledown Productions, a London based independent production company and sent my proposal off. I received a response David Prest, the MD saying it is something that would be considered in a commissioning round. You can see the confirmation of this below.

As part of this week’s special programmes looking at rewilding Britain, today we ask after two hundred years of a wolf free Britain, is now the time to reintroduce them?

IN: (Wolf howling and music fades in) They are fleet or lazy, moving through their own . . . .

BACK: This episode of rewilding Britain was narrated by Louise Brealey, Pete Nottage and Nigel Williams. The producer was James Larvin. If you’ve missed any of the rewilding series this week, you can catch up on all the episodes at any time on the radio four website.

After two hundred years of a wolf free Britain, is now the time to reintroduce them? In this episode of the Rewilding Britain series, we hear how the return of wolves across the western world has helped to rebalance the environment.

Experts from the fields of ecology and wolf research will discuss their first-hand experiences with wolves, explaining benefits and implications of having wild animal in an ecosystem. The way in which the public perceive wolves will be explored, alongside looking at how public opinion is developing with the award-winning novelist Sarah Hall. Wolf expert Pete Haswell will also come face to face with the creature to reveal the true nature of the wolf.

Below is an image that can be used to promote the programme and also to be used as the BBC iPlayer image for the episode. It was taken at the UK Wolf Conservation Trust. 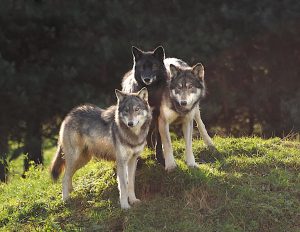 Below is an example of how the programme can be promoted on a range of social media platforms. It includes a short video that has been optimised for social media to engage the online audience to listen to the programme on BBC iPlayer. These videos are used more and more by the BBC to promote programmes and the brand to the world.

Would you want to see wolves back in Britain? As part of our Rewilding Britain series we join the conversation of those who want to see just that. Available now on BBC iPlayer Radio – bbc.in/2eHgTkf