I am the Producer for Group 1 which are working on producing the play ‘Shape of You’ by Fiona Sangster. In between our in class exercises in the early stages of this module my team and I met on several occasions to discuss our initial thoughts on the play and how we wanted to edit and portray the script throughout the production. We decided on changing the music throughout the script and replaced certain sound effects i.e gramophone scratching with a more subtle crackling sound as to avoid any cliche in production.  Overall there wasn’t much we felt needed changing in the script other than that. That said it was imperative that I contacted the writer not only to invite her to the recording session but now to ask for her permission to make any changes. 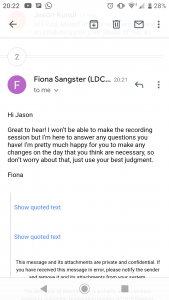 Luckily, as shown in the above screenshot Fiona was more than okay with us tinkering with the script as we pleased. As casting was taken care of by Jeremy himself I felt there wasn’t a great deal of work available for me to do in the pre production stages. I did however meet with Joe and Jannine and we decided what sound effects and wild track to record live or in post production. We then as a team discussed and revised the rough schedule Jannine had put forward for the recording and all agreed on what scenes needed priority during the recording session. Off the top of my head I believe we agreed upon recording scenes 1-5 and 8-9 and then focused on the rest in the second hour and a half of our time frame. We did this so our actors weren’t rag dolled in and out of the studio constantly between scenes and our time was optimised. On the day of recording me and Joe got into the studio for half 8 and met the rest of our team, we checked the studio was in order and did a double checks of the mics ourselves just to make sure. Me and Joe then went and bought bottles of water for the arrival of our actors. One the actors were all greeted myself and Kate sat present for the first read through. From the initial read through i knew that we would have little trouble in directing the actors throughout the session. I must say they were all extremely talented and well casted and all added their own nuances to the play which worked brilliantly. Throughout the recording I was on hand to redress the set in accordance with the acoustics needed for the individual scenes. I secured props for the actors and even added to the soundscape ‘acting’ with Jannine in the background creating ambiance in our public restaurant and cafe scenes. All in all I believe the recording went very well, we ran slightly ahead of schedule which enabled an extended break for our actors.

After recording me, Joe and Jannine met in one of the studios and held a discussion as to what takes we should choose from the recording session. Joe had already roughly arranged the scenes in audition and we had a listen. We were all once again very impressed with the quality of the recording and was confident in Joe’s editing skills to bring the play up to professional standard.