The station name we decided upon was Bite, the station theme is a cookery based station.

Pilot Week 1: Assigned the role of Head of Music, with Jason & Harriet assisting me, we spent the run up to our first pilot show creating; our music policy, the entire music playlist, creating and drawing up a music clock/full clock with ads, news, etc.

As well as selecting which songs for which weeks and curating them in a way which has ups-and-downs/ebbs-and-flows and compliments the station as well as working well with the imaging.

After curating the playlist, we uploaded around 50 songs into Myriad for the station, when we did this, we ensured the beginnings of the intro’s, the ends of the intro’s, and the extro’s were done and organised in Myriad.

Pilot Week 2:
We worked to upload more music into Myriad for the station, as well as creating and drawing up a music clock using a programme called ‘the broadcast clock creator’.

As well as this, we created and filled the Myriad log with ads, news, imaging, music, organised in the correct running order. 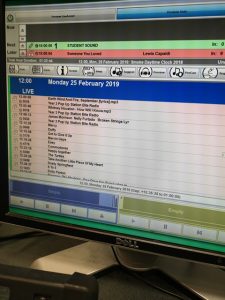 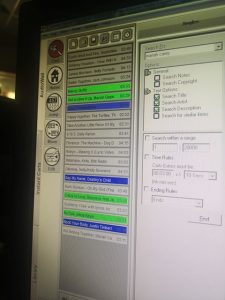 Official Show: Week 1
We changed the playlist as according to the feedback given over the two pilot shows, as well as this we checked that all tracks in myriad were high sound quality, clean and free of adult content.

We also replaced any songs which have low sound quality or explicit content, as well as changing around parts of the log to add variety into the music playlist. Finally, we created a broadcast clock to show the length of each song and the amounts of A’s, B’s, and C List songs. 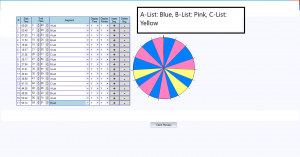 Official Show: Week 2
Myself, Jason, and Harriet worked to alter the A-List, B-List, and C Lists to be better organised and have a better flow. We then updated the playlist by adding newer music sourced from A, B, and C Lists from popular radio stations in the UK, as well as some world music to match the stations theme. Finally, we uploaded the new music into myriad, then created a log and scheduled the music into it.

Official Show: Week 3
Myself, Jason, and Harriet worked to add new music to the playlist which we sourced from popular UK radio stations. Most of the music additions this week were to the A-List, with one addition to the C-List. We then uploaded the new music into myriad, then created a log and scheduled the music, imaging, adverts, news, and more.

Myself, Jason, and Harriet worked to decide upon which new tracks to add to the station playlist this week, as well as which previously added tracks we were going to play this week. I created the playlist and uploaded it into the system on Saturday, the 23rd of March. Due to a family emergency I was not able to attend the week 4 visualisation set-up day on Friday, March 22nd.

I decided to let the rest of the group vote on which song to finish the last week of broadcasting with, which was a resounding yes to presenter Joe’s suggestion of Queen’s ‘Another One Bites The Dust.’

On the day we made additional changes to the days playlist, taking out two food related songs and replacing them with two A-List songs. I worked to reflect this in the running order and the presenter scripts. I also washed up the items used for the cooking parts of the show.