Synopsis: The Cornish Chough, or ‘Palores’ in Cornish, is a member of the crow family. It’s most recognisable for its distinctive bright red legs and long red bill. The bird has had a close association with the county for several hundred years. Today, it is estimated that there are only 80 choughs remaining in the county.

The programme includes poetry and stories relating to the chough, as well as interviews with bird experts, including Claire Mucklow, the Species and Habitats Officer at the RSPB who manages the Cornwall Chough Project.

This explorative documentary-soundscape delves into the bird’s connection to Cornish identity, and the relationship local people have to this little-known corvid.

The chough is very much loved in Cornwall, and can be a very emotive subject for Cornish people. To begin the programme, the listener will hear a montage of voices explaining why the chough is so important to the county and its people. This will be mixed with actuality of the Cornish landscape, to set the scene, and tied together with a relevant song relating to birds or flying, such as Coldplay – Fly On.

The piece will aim to showcase how special this relatively unknown corvid is, so will consist of multiple interviewees explaining the bird’s qualities, to paint a picture of its character. These interviews will be combined with a section of music and actuality, intended to make the listener imagine the bird flying. The choice of music will complement the motion of the bird in flight.

The piece will draw upon many local sources such as poetry and fiction. This will include a section from the novel ‘Shadows In The Sky’ by Pete Cross, which tells the story of the Cornish Chough over one hundred years. The book is set in 1700 when choughs were commonplace on Cornish clifftops.

At this point, Ian McCarthy, President of the Cornwall Birdwatching and Preservation Society, will mention the legend of King Arthur living on as a chough, which will introduce R.S. Hawker’s ‘The Wreck’. This will be mixed with seascape actuality, which will transition into an interview with Claire Mucklow of the RSPB explaining what conditions choughs require and how they dig into the soil with their beak. Whilst Claire describes this, actuality of soil being moved will be heard.

This will lead onto the reasons for the bird’s demise in Cornwall. The music will change in tone at this point, and become more sombre. This shift in tone will lead onto the poem by Angie Butler. This is a highly emotive piece so should be treated with respect (minimal music and SFX).

Claire Mucklow will then talk about the return of the choughs in 2001, followed by ‘What’s said down Lizard?’ by Bert Biscoe, a poem which describes a conversation which could have happened in the bar of the Lizard pub when the first pair were first sighted.

The piece will end by discussing whether the chough has a bright future in Cornwall.

Throughout this work, a seascape will be present as well as the sound of the birds. The incidental music will be chosen to reflect Cornish heritage.

I contacted Claire Mucklow of the RSPB, and after a phone-call about the project, she commissioned me to produce the piece. She requested for it to be “in a way that would mean we are able to use it in the future for educational purposes”. This request did not dramatically change my concept, but I was sure to include as much context as possible for audiences who do not have prior knowledge of choughs.

Cue: The Cornish Chough, or ‘Palores’ in Cornish, is a member of the crow family. It’s most recognisable for its distinctive bright red legs and long red bill. The bird has had a close association with the county for several hundred years. Today, it is estimated that there are only 80 choughs remaining in the county, located in the far West of Cornwall.

Back anno: ‘Palores: The Bird Of Cornwall’ was produced by Gabriel Lucas-Green, and featured interviews with Pete Cross, Ian McCarthy, Claire Mucklow, Angie Butler and Bert Biscoe. To report sightings of Cornish choughs, you can email cornishchoughs@rspb.org.uk.

Below is a promotional tweet for the programme, which includes a link to listen online. 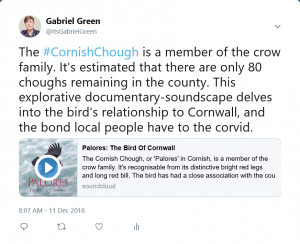