After we found out our groups we had a meeting instantly where we decided that the genre of our show would be Soul and Funk we also discussed briefly what people’s preferences were for the roles before setting up a future meeting time on Mondays.

During the several Monday meetings, we managed to organise the roles and start planning what we were going to do in our roles. I was assigned the Interactive Role along with Dan so we had several discussions about what we planned to do.

On Thursday 3rd November a week before official production started on the show I activated both the Facebook and Youtube pages for our show and filled in the information as well as adding the logo for our show and the presenter photos made by Dan for imagining, Meanwhile Dan had worked on the blog and Twitter. This meant that come the first week of official production we already had all of our social media channels up and ready.

During the start 0f production week 1 I wrote the interactive plan in as much detail as possible and uploaded it to google drive. This meant that the group knew what the interactive team were doing as well as creating a checklist of sorts for me and Dan to follow.

On Thursday 7th November we had a big group meeting where we all updated each other on what stage we were at and what we were currently working on. Eliza also told people what she wanted them to be working on that day.

After the group meeting, Dan and I split off to sit together and checked off what we had done and also planned what we were doing this week. I was working on the Competition our show was having and working out how to provide the online content for it. After discussing with the Ads team I found out that the prize was to win a Kia Soul car with a Christmas hamper in the boot. They had not yet managed to decide how to run this competition. I suggested the idea of making it an online competition where people go to a page on our website and wrote a paragraph about where they would want to drive to this Christmas. The group decided this was a good idea so Dan, Eliza and I started discussing and planning the calendar for the competition before finalising it and adding the dates to the interactive schedule calendar on google docs.

After organising the schedule i decided that I wanted to use the twitter and facebook channels and start promoting the show and making them active. After discussing with Dan we realised that as our show is an already established show that we would have been going “live” in about an hour. So we wrote and scheduled a tweet and a facebook post revolving around our Rare Groove segment for when that would be going love and left them to be posted.

Finally, we had quick discussion over our schedule to make sure that we were keeping on top of things before deciding what we would be working on before our next Production Day.

For this week my main priority was starting on the blog posts for the Kia Soul Competition which is being launched on the 25th of November. So during the start of the week I wrote some draft blog posts on Word. Then on Thursday after having the team meeting in the morning i went to work on writing the first blog post which was the promotion for the competition. Once I finished writing the post I read it to Eliza to make sure she was happy with it, which she was, so I scheduled it to be posted the following day on Friday.

I then had a discussion with Dan and Simon about whether we should do some posts for the Soul Train feature like we are for the Rare Groove one. We decided on doing a video with the presenters Clare and Callum saying what this week’s end to the soul train is and asking the audience to suggest the song they think should follow next week. I then wrote the script for this video with Simon and Dan.

As well as working on the blog posts this week I also recorded a dogs trust advert for Abbie as well as posting a tweet and facebook post for this week’s Rare Groove feature.

On Monday we had our normal group meeting in which we discussed how each team was doing and what stage we were on before heading off and working on what needed to be done. For me on Monday that was putting Mi-Soul into all our information on our social media sites as to make it clearer what our show was and where/when it aired. As well as that on the Monday and the following few days I wrote the Competition Launch and Competition Closed blog posts and scheduled them for their respective post dates 25th November and 2nd December.

Also revolving the competition I talked to Bernice who was writing the Radio Ad for the competition and explained to her the concept of it and how the audience would enter. She then wrote the script for the Ad with a little input from me.

On Thursday our group decided to have a practice run through of our show in the afternoon so I ran the social media during that process which included several posts revolving around the features including the Rare Groove and Soul Train segment.

On the Friday morning when the Competition Launch posts went live i shared it on both twitter and facebook.

This was the week of our Pilot show so it was a very busy week. We had several group meetings to make sure that everyone was on top of their work and knew what had to be done.

During the Pilot show, I posted on both our twitter and facebook accounts. Most of the tweets and posts were focused on our features and revolved around getting the audience interacting. 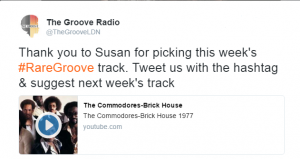 Also during the Pilot show I worked in the OB room and recorded video footage of the performance with help from Bernice.

Just before we started our live show i gathered all the information I needed for the social media posts during the show. This included the details of the song we were playing for Rare Groove and the songs in the Soul Train Mix.

During the show, my job was once again to post on twitter and facebook throughout the two hours. However this time I made sure to post more frequently and as on time as possible because of feedback issued during the Pilot Show. The tweets and posts on facebook i made during the show were:

Also during the show, I retweeted any audience interaction and made sure to let the presenters know about it so they could mention them during the show.

Whilst doing my social media job during the time I also helped Simon fill in the PRS form by finding and reading the information about the songs from the music playlist spreadsheet (song, artist, catalogue number, record label) which he then filled in the PRS form with.