Me and my group made a lot of progression in our first few meetings. We very quickly on the first day decided which genre to pick from the list. We picked New Music, which gives us a lot to play around with as it is not so straight forward. We realised we would have to narrow down to an actual genre as New Music could be indie, pop, rock, R&B, hiphop or anything! So we picked urban, which still gives us a lot of variety. We again, Quickly decided our roles, mine being the OB presenter, which I chose as I am quite knowledgable in new music and underground artists especially with in London and our target audience is young local London, and I knew I would be able to find someone to perform through good contacts. We talked about examples of music we might play on the show and ideas we had, making sure that for people that felt less comfortable with the genre that we were all on the same page of knowing what kind of style we were going for. I listened to some 1xtra shows to give me more of an idea of what we were doing too. We then decided for the next meeting that everyone should bring 3 songs they think would be good for our music library. I wrote a list of 10 artists.

The Next week we decided on a Name, which was Refresh London. We came up with possible tag lines and imagining ideas, and we came up with some idea’s for possible ads, like cars, clothing brands, Billy found a good SuperDry advertisement that we are going to use as inspiration for our clothing advert (https://www.youtube.com/watch?v=AQKQ33FSG2k). Then we decided we would be sponsored by a drinks company, KA the Caribbean drink. Jason came up with a logo, Bethany set up a twitter, instagram and snapchat for Refresh London and Kate made a wordpress account. We took inspriration from the look of NTS radio (https://www.nts.live) trying to keep everything very simplistic but cool and bold and appealing. We all gave ourselves targets for the next week.

Mine was to contact people for the OB, and to contact people for voices for our ads/imaging. Then in the next week I managed to get a new emerging female artist called Iyamah to perform who has an incredible R&B/Neo Soul voice and has ben collaborating with AlunaGeorge, Uno Hype, Eyez, My Nu Leng. She is going to send me a bio and photograph for the website. We have decided she will do an acoustic set with a guitar, and she will do 2 live songs and maybe one prerecorded song, with an interview. I have got two back up artists/bands – Hannah Rodriguez, a beautiful singer with an EP out this summer, and a band called RIZES, that are cool and pop kinda sounded band that have got an EP out and have just had an article written about them in NME magazine. Hannah will perform for the Pilot as she has the same set up as Iyamah. I also manage to asked a friend Raph from South London who is an actor and does voice acting to come and record our imaging, he has a street south London accent so it would sound good for our brand. I am happy with my progress and my teams progress so far, I think I have done as much as I can for now in my department and I am happy with my choices, they perfectly fit the show I feel. Well done team B!

This Week the next step I took after booking artists for the live performance and for the pilot show was to do more research and think more carefully about questions to ask my artists. So I spent time looking at what they are working on currently, people they have collaborated with, posts they made on their Facebook, lots of small details about them to add in for the short interview. Then I worked with the group to decide what time to have her perform on the show and we decided to have her on in the second half at at 12:20pm after the News and some music. We decided we want to have the interview which would be 5 minutes, then a B list song, then her performance – maybe two songs. I had a mock OB with the team this week which went well after a few technical difficulties which has given me more confidence for the actual performance.

Then me and Jason and Pulama came up with a name for the room of the performance, which we settled on being ‘The JuiceBox’ relating to the Refresh/’Thirsty for new music’ theme, also as KA are our sponsor. So next week I will come a up with a logo for this which we thought could be in orange and black or maybe purple like the KA colours. We then discussed ideas for the look of room, props etc. We thought about a giant cardboard juice box, projections, of maybe bubbles like in a fizzy drink on the back wall or projected on her, or drips of juice pouring down the walls, or our logo bouncing around the room, maybe a juice box microphone. I feel like after this week me and my group have become more organised, Pulama was great, having meetings with all the the different departments within the group and giving clear targets of what to do. I think we are doing well at keeping on track with all our tasks.

I designed the logo this week for the “JuiceBox”. We made some changes to our schedule, we decided that actually the studio would go live to me at 12:07 not 20 past, and we decided that they would hand over to me to describe the juice box and the vibe of the room, then an ident, then the interview, then her first song, then ads instead of a core song then her second song. I Also wrote my questions for Hannah our artists for our pilot show, and stayed in lots of contact with her over the week informing her of all the details, checking she was still able to come, found out the lengths of her songs so it could be formatted in the schedule. I had more of a think about the room. I did more searching for urban songs and I sent them to Jason which he added to the schedule.

The week of the pilot show. I emailed our  technicians with details of what tech we would need for the show. I practiced my questions I was going to ask hannah, and I let her know what I was going to ask her. I sent an email to Iyamahs manager with the details so he had details of the real show on the following Thursday and so did she. Iyamah sent me her bio and photo which I forwarded to Pulama for the website. On the day of the Pilot show I spent the morning setting up the room with everything it needed for the performance. I did mic checking and made sure me and the presenters Billy and Kaylee knew what was going on and we were both clear with what was going on during the live performance section. The pilot show went well, although there was quite a few problems with levels, my levels kept changing and there was some effects put on my singers voice during the interview at the wrong time so I made sure to speak the the technician to make sure this wouldn’t happen again next week for the real performance. I made sure to make my questions more concise and to the point to make the interview shorter with Iyamah.

The week of the Real 2 hour show. I listened back to the pilot show, and made decisions about anything I decided I wanted to change. This week consist of just finalising and polishing everything taking in board all the feed back from the pilot the week before. I spent time really decided on the look of the room. I drew a floor plan of the “Juicebox” and decided how I wanted to decorate it. I chose a purple moving pattern video and edited it together with the logo on top to project onto the black curtain in the room. I then went to some charity shops to look for any props, where I bought a rug that was orange and matched the purple/orange and black theme. I bought some juice boxes to give out to audience members. I bought a load of pillows and throws from home to make imitation ‘sofas’ out of the chairs to give it that ‘lounge’ feel. I chose to borrow purple and orange beanbags from the uni to put in the room. I sent a photo of me to Pulama for the website. I made a poster which i stuck up in the forum advertising people to come and see Iyamah perform. 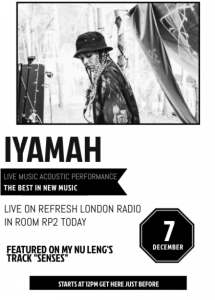 I emailed the technicians with the requirements for the live show. I finalised my questions for Iyamah and practiced them. I went in the evening before the show to start setting up, and check myriad with Jason. I put all the chairs away, the rug down and put purple and orange filters on the lights. I got equipment out like camera’s and projector. Then of the day of the show, I helped set up the room again, placing beanbags ‘sofas’ in different places and sorting out the mics and the levels, working with the producer making sure she was happy with everything. I put up more posters around the department and downstairs before the show to encourage people to come. I collect Iyamah and her guitarist and then made sure they were all set up and comfortable before she performed, reminding her the low down of what was going to happen. I got Jason to go down and try find people to come and watch the performance. I feel like over all the real show went really really well, and i’m very happy with my groups work, the links sounded tight, adverts very appropriate for the show and well produced and good song choice.