Today (28th) roles were assigned for the pop-up station. I put myself forward to be production manager as I wanted to try to push myself with this module, to have a bigger role and be confident with it.

After class today, I added everybody to a Slack site and began to create a diagram of the roles which were decided today.

I was keen on one social media username being used on all platforms so I discussed potential options with Gabriel, Pulama and Mary in class and on slack. Next week that will hopefully be sorted by the Social Media and Digital Content teams.

I met with Mary and Holly today (31st) to discuss the general structure of the speech programme and what the clock should be like.

I took notes today during class (4th) and then created a to-do list from that to upload to Slack so that everyone had a clear understanding of what was going on. I was asked by the Digital Content team if I could buy the website hosting and the URL, which I did.

It was discussed by other members of the production team to change the format of the three hours of the broadcast from 2 separate shows to one show which just had more music in the last hour. I suggested that when explaining this to the rest of the class, we justify having more music in the final hour because of the musical guest that will appear during that time and to highlight that they may also perform in hour 3. I adjusted some station roles in line with this structural change.

I met with Matthew and Riya today (7th) to put together the show clock of the music hour and discuss the content of the show. I thought it was vital to this hour that there was an interesting musical guest and told them to research who may be good to appear on the different themed weeks/ pilots.

Rhys and Holly spoke with me about the budget as they wanted to know if they could tell potential studio guests if their travel could be paid, which I said was fine. Kate also wanted to ask about the budget, as she had an idea about some online content about instagrammable food. I told her to come up with a rough price list of the places she’d like to be featured before we discuss it further. Pulama also said she’d like to buy some coloured card and an egg timer to use for social media/ website photos, again I said for her to take a look at prices and get back to me. After these discussions, I created a budget spreadsheet on Google Drive so that I can keep track of everything a lot easier and tell people how much of the budget is left.

I sat in the studio with Matthew while Kaylee and Joe tested out some content for the music hour and made some notes to give my opinion on what worked/ what didn’t. In particular, I thought that Kaylee guessing a food item from Joe worked far better than when they tried it the other way around. I also thought that in the ‘right or wrong’ section, it worked a lot better when both of them have opposing views on the subject so that the listener is on one presenter’s side.

I began to write a description of each role on Google Drive as some members of the group felt they weren’t clear on what other people were doing.

For this week’s pilot, we were broadcasting for two hours rather than three. Today (18th) I sat in the studio and wrote some notes during rehearsal and during the speech hour, I called the guests who were being interviewed over the phone. In the music hour, there were a lot of people in the studio so I decided to leave and listen/ take notes from another room.

Gabriel spoke to me about wanting to pay for a voiceover artist to do the idents, which would cost around £20. I thought that it would be a waste of money to pay someone when I was sure we’d be able to find someone we know to do it for free but I discussed it with Mary who did agree that the cost was too much. We sat down with Gabriel together and explained our thoughts and she suggested that her friend could do it. After hearing a recording of an audio piece she had done previously with her friend, the three of us were in agreement that we could use Mary’s friend to voice the idents. Gabriel also expressed that he would be interested in us buying some kind of banner to use for visualisation of the branding during videos. Mary and I felt that this was an unnecessary cost but Mary suggested that we could get around the cost if the sales team got in touch with a company who make banners to see about some kind of sponsorship, and then we could get it for free. Gabriel said he would follow this up with our head of sales.

During the feedback session after the pilot was broadcast, I wrote notes of everything that was said and uploaded this to Google Drive later.

Today (22nd) I sat in on a meeting about the social media / digital content schedule with Pulama and Gabriel. We also discussed which content should be on which platforms.

For this week’s pilot, we were broadcasting for all three hours.

Before the broadcast today (25th), Riya had brought in some snacks for a feature in hour 3 but Matthew wanted more as he believed the presenters would not be able to fill the amount of time he had allocated with only the three types of food purchased already. I disagreed and explained that the presenters are more than capable of discussing the food, trying it and giving their opinions in the time allocated. I also expressed that I did not think it was wise to spend more of the budget on snacks for pilot content. Matthew disagreed with this but after Mary backed up my opinions, it was decided that the three varieties of food purchased were enough for this week’s pilot.

The producers decided that for this pilot, Matthew would call the phone guests and that I would greet and look after the in-studio guest. I met her at reception and paid for her parking then took her upstairs where she filmed a video with Pulama before I took her through to the studios for the interview.

I took notes at the feedback session and uploaded them to Google Drive, and then shared this with the class on Slack.

Today (1st) I met with Pulama and we went to four locations around london which fit the four themes of the station weeks. We thought these were Instagram-worthy for the ‘Too Good to Eat’ online feature. We tasted food at the locations, took photos of it with pieces of card which matched up to each week’s theme colour and reviewed the food for the feature as we were eating. Below is a photo of our set-up for taking a photo of our food at the location visited for seafood week: 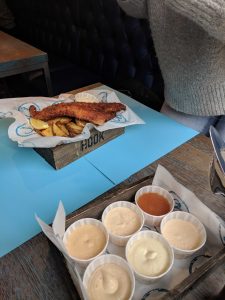 I checked in with Bethany to see how she was feeling about her news team. She told me that one particular member of the group hadn’t communicated with the team since the project started so she was worried about only having herself and Kate working on the news. I fed this back to Mary and that’s when Riya joined the News team to help them out.

Before the broadcast, I printed running orders for everyone and throughout the show printed extra things which the producers asked for. I also tried to help Kate figure out some pronunciations of words in the news bulletin.

During the broadcast, just as the news was being recorded, a breaking news story came up on my phone so I went through and updated the team so that that first bulletin was up to date.

I listened to the adverts that morning and spoke with Stuart about the possible need to change some. I said that the Field to Fork advert sounded like the child and mother were the same person and that the Casbah Records voice didn’t sound like the right fit for the brand.

During our feedback session, I took notes and uploaded this to the google drive so that everyone knew what to improve on for next week.

I printed running orders and scripts for the producers.

The sales team were told to record a different voice for the Casbah Records ad, so I got my dad (who is a radio presenter) to do it. This became the final version of the advert.

I took notes during the feedback session and helped Matthew look for a food critic to appear on hour 3 of seafood week.

Edited down a pre-recorded interview about fishing and Brexit.

Emailed the London Coffee festival to see about giving away tickets to it for dessert week.

Went into uni on Friday (22nd) to help set things up for the visual elements of dessert week, like putting the green screen up. I sat with Mary, Rhys and Holly to discuss what we needed to buy to make things look good. Mary, Stuart and I divided up the list and bought things for the show.

The green screen was tested with a kitchen background, I was unsure about using this as our other filmed parts in previous weeks were plain colour background and I thought we should keep consistency between each week. The majority wanted to go with the kitchen background so we kept that.

I printed running orders, and tweets for the producers and looked after the two studio guests. I also prepared the ingredients in the correct quantities for the waffles, I did forget to take the milk in but Bethany said on-air that they should also be adding milk to the mixture then I went through to the kitchen and got it for them.

After the show I helped clean up the room and return equipment.