I am a student at the University of Westminster, studying Radio and Digital Production, currently in my final year.

For this project I really want to focus on and enhance the excitement around being part of the RAF and show what an apprenticeship involves. I want to explore how RAF Apprenticeships changes lives and opens the door to such a unique career. I would love to be able to talk to real people that have taken part in the scheme and follow parts of their daily routines and get them to share the positive impacts it has had on their lives – in doing so to encourage more people to consider joining an apprenticeship.

I am aiming to create an intense but exciting piece, which will really make consumers want to find out more. I want to show that taking this, as a career path, is one of the most exciting, challenging and varied things you can do.

Audio is a great way to help promote organisations such as yourself, especially as this will give an insight to young people about how their career can be anything they want it to become and the RAF can open so many doors to opportunity.

Depending on what suits you best as an organisation I am also considering adding a visual element to this audio piece.

Hope to hear from you soon,

RAF Apprenticeships: A Snapshot is going to bring to life the excitement and lifestyle of an RAF apprentice. Delving into the journeys taken by recruits when training as an apprentice this programme will explore multiple roles the RAF has to offer and gain insights into real stories from real recruits. Journeys will be portrayed as if the listener is living alongside the recruit.

This programme seeks to promote the RAF apprenticeship scheme to the younger generation and encourage them to apply to be part of this movement rather than a civilian apprenticeship; through highlighting the differences and benefits that the RAF has to offer.

This programme will give an exciting insight into the 22 apprenticeship roles, which can lead to 50 different careers from drivers and caterers to intelligence and engineering. With more young people finishing school and not knowing where to go on to next, an RAF apprenticeship provides a set up for life. This will be a vibrant, energetic episode highlighting an element of intense training and packed with diverse journeys of recruits.

The programme will begin with actuality to build excitement. Samantha speaks to RAF Cosfords newest and long term recruits about their journeys so far and the influences the RAF has had on their lives. Apprentices and Instructors from various schools at Cosford guide listeners through their daily routines and share an exclusive insight into the intense training that comes alongside being an apprentice in the RAF but also the excitement of being a recruit.

Highlighting all the ups and downs – the intense times and the exciting times. Doing this, we ask important questions like: How much has becoming an RAF apprenticeship changed your life? What makes an RAF apprenticeship different from the rest? What’s the most exciting thing about being part of this scheme? What’s the craziest thing you’ve been involved in here that you would have never dreamt have doing before?

The promotion piece will include all the important information on RAF apprenticeships such as; benefits, lifestyle as an apprentice, education and funding, social life, fitness and roles you can get into. This is to be made exciting; it will be informative but stimulating. The lifestyle of the recruits will be broken up by information about how to get involved in the scheme. Actuality from the Cosford RAF camp will be used to create intensity and build up excitement throughout the piece.

I feel it is important to create an audio piece for this recruitment as podcasts and radio are ever growing. Creating a piece that doesn’t need to be viewed visually will benefit the RAF as a whole and the programme will be consumed by a wider range of people. It can be played in the car or simply in the background of a day-to-day routine. An audio piece is ‘on the go’ listening, rather than that of a visual promotion video.

‘RAF Apprenticeships: A snapshot’ is going to give an insight into one of the most life changing apprenticeships you can get involved in and encourage recruitment. This programme is currently running, as a one off episode but if the content fits then this could become a 2-part episode, 10 minutes each side.

Confirmation: The email received from Chris Wilson to allow me to work alongside himself

Cue: to introduce the audio

With more young people finishing school and not knowing where to go next, this promotional piece is going to give an insight into a career not many people will realise exists. Young adults will choose either a civilian apprenticeship or simply get a job somewhere that they don’t thoroughly enjoy.

This promotional documentary visits RAF Cosford and is going to provide a brief and exciting insight into an apprenticeship in Royal Air Force, the trades you can train in, adventures that come alongside training and the benefits offered. Presented by RAF personnel themselves, discover why working for the RAF is no ordinary job.

INTRO: (Sound effect) “To get through the hard times…”

BACK ANNO: That was RAF Apprenticeships: a Snapshot by Samantha Friend. To find more information of what the RAF has to offer visit raf.mod.uk.

Images: To accompany the audio and help with promotion 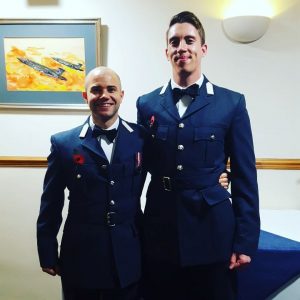 Many young people do not know what to do once they have completed compulsory schooling. Something that many people do not know much about is the Royal Air Force. I visited RAF Cosford to see what doing an RAF apprentice has to offer, to find out more, listen here https://soundcloud.com/user-901938446-176786826