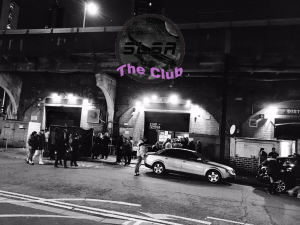 Synopsis: With clubs being closed for most of the year, the chances of being in a club before the end of 2020 are slim to none. With so many people missing club culture, DJ sets and the smoking area, it would be a shame to end 2020 without a brand new club experience. This piece is a point of audition simulation from the perspective of a bar back in a club. This was created to explore every angle of a club, from the line outside, to the mindless chats in the smoking are and the new best friend you make in the toilet. As attending clubs to record new sound for this project has been impossible due to the pandemic, a lot of the audio comes from found sound from social media app ‘TikTok’ or from free sound sites such as the BBC SFX archive and EpidemicSound.com. Each scene has been planned out to experiment with all the elements of a night out we all miss.

‘The club’ is based off of Corsica Studios in Elephant and Castle and the night listeners will be virtually attending will feature a mix from SLSA’s founder, Grandmixxer.

The duration and delivery date were chosen to fit within the project brief. The demographic which this abstract piece would appeal to would be club goers. The typical age for people who attend clubs are 18-25. Therefore, this demographic was chosen for this piece to appeal to as this 12 to 15 minute sound art piece, in essence, is a walkthrough of a club night. This would appeal to people particularly during this time as nightclubs are shut down due to covid-19. This piece is intended to act as an inclusive audio only experience of attending a new club night. Vice, is a media group which have an output of a variety of digital media mediums, including podcasts and audio only pieces. Amongst many topics, they have a shown interest in club and events culture as well as the music industry. If this piece were to be platformed formally, Vice would be an ideal place for this piece to be hosted.

A first person walk through of attending a new club night, this will be an SLSA grime event with different rooms and areas, which the person attending (the listener) will walk through and interact with different people throughout the night. Spaces interacted with in this walk through will be, in order: Outside the front of the club, waiting in line and getting in (interacting with the door man), going through and getting to the bar and ordering a drink (interacting with the barman and overhearing orders, someone spilling/dropping a drink), being on the dancefloor, consuming alcohol, going to the bathroom (speaking to someone in the toilets), going to the smoking area (speaking to people outside) and going back in to the main room for the main DJ Set, then leaving the club.

Anytime people interact with the first-person character, gender neutral terminology will be used to preserve the intended purpose of creating an inclusive virtual audio walkthrough.

I would like to start with coming out of a cab (car engine, car door shutting) and end with exiting the club (Door swinging and people speaking outside). Sounds such as a DJ set will run throughout as that is what would be constantly playing in a club but the sound will constantly be manipulated to fit the developing narrative, E.G just before going in there will be a lot of EQing used to take everything but the bass out of the music. I would also like to use binaural effects when the character stands up after going to the toilet (simulate the effects of dizziness from alcohol consumption). There will also be conversations with a variety of character voices for diversity such as a typical deep bouncer voice, a young female (south London accent). There will also be sounds such as drinks spilling, crowd noise as well as doors opening and closing.

I have approached the grime label SLSA (South London Space Agency) to commission my project as they have regularly put on events with their roster of DJs and MCs. Therefore the club music will be a mix from an SLSA DJ to fit the brand. The agency pride themselves on being innovators of the urban underground club sound and constantly the developing futuristic approaches to grime. This makes them a great fit to commission this project.

Commission: As the piece is about a club night, it was only fitting to approach a label formed of pioneers of underground club culture. I spoke to Grandmixxer (Carl) who is the founder of Grime label SLSA and current Rinse FM and NTS resident. After a phone call, he was happy to commission the project, allowing full access of his discography as well as providing an exclusive DJ mix made for this project. The commission did come with certain requests which I have been mindful of throughout. 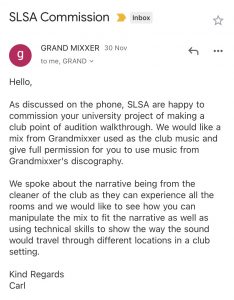 Have you been missing going to the club? Has covid-19 almost made you forget what it was like to be out until 6am? Look no further because this piece was made to combat the corona club blues and provide an immersive experience to grime label ‘SLSA’s virtual club night. This 14 minute point of audition piece explores a night out from the perspective of a bar back to the soundtrack of an exclusive mix from SLSA found, Grandmixxer.

This piece is best listened to through headphones due to the immersive nature and apologises, but like any night out, there will be some strong language and references to drug use throughout.

In: “I think the worlds’ a mess politically so…”

Out: “See you tommorrow. Bye!”

Back Anno: ‘The Club’ was produced by Charlie Kelly. This piece features an exclusive mix from SLSA founder, Grandmixxer. 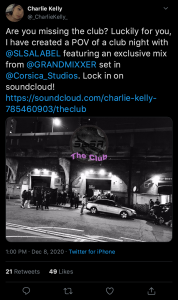 SOUND EFFECTS WERE USED FROM TIKTOK SOUNDS, BBC SFX AND EPIDEMIC SOUND. PRODUCER CHARLIE KELLY HAS ALSO RECORDED SOME OF HER OWN.