‘Students Are Too Embarrassed to Speak Out About Their Depression’

Peter Wilson, a councellor and life coach from Samaritans has called out to students to speak up about depression they might be feeling, even if they are embarrassed about their feelings.

‘Students don’t want to worry their family or friends and think that the best outcome would be to keep it to themselves.’ The comments come recently after a study, from the Student Housing Company found that a surprising 71% of 2,460 students across England, Wales and Scotland have suffered from mental heath problems. Whether it be anxiety, depression or eating disorders. It’s a statistic which is sure to surprise to both fellow students and parents. Wilson’s comments come just a week after a 21 year old female student became the 5th person to commit suicide in six months at Bristol University.

But why is there such a worryingly high number of students who are being pushed to the very edge? It’s no surprise that students are often feeling very stressed and anxious shortly after starting university. With the start of a new chapter of their lives; with a new city, new friends and a new- well, everything. With all these elements combined with personal difficulties, young people can often become bewildered and it becomes extremely difficult to stay level headed. This can become extremely overwhelming and in some cases fatal. Wilson goes on to say; ‘Students may feel they are the only ones going through this transition. I can assure them; they are not.’

According to the Student Housing Survey, as many as 40% of students would rather not speak out about the issues they are experiencing. This number is alarmingly high, when asked if he had any advice to students who may be experiencing depression, Wilson said; ‘Don’t worry, talk to someone, your friends, your family or a councillor. This is how you can make yourself feel better.’

This number is surprisingly high, asked if he had any advice to students who may be experiencing depression, Wilson said; ‘Don’t worry, talk to someone, your friends, your family or a councillor. This is how you can make yourself feel better.’

Signs of depression may include, lack of sleep, general unhappiness, feelings of worthlessness, emptiness and suicidal thoughts.

OUT: ‘… your friends, family or councillor.’ 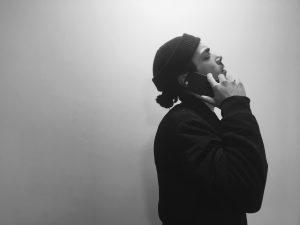 If you have experiences any signs of depression or know someone who may be in trouble then please do look for help. Just call Samaritans on 116 123.