1. Written Pitch to the Press Office at Give Blood

Title: The ABO’s of Blood Donation

The amount of young people that donate blood is shockingly low; Over half of the people that donate blood are over the age of 45. This three part podcast will explore each process of donating blood from the donation, delivery to the hospital and the blood being used. This will break down the serotypes and show young people how simple the process is.

Organisations and charities have started using podcast to research out to new audiences to encourage people to get involved. In America especially, podcasts are huge and are getting involved with some big charities such as Greenpeace USA, Amnesty International and OnePlusOne who are all putting out their own podcasts. I feel like an organisation like you would really benefit from this.

The visual aspect for this would be pictures off the process, such as the equipment used, me (for example) giving blood, the van etc. This breaks down the barriers even more. It would be a separate tab on the website the has the title of each episode, this is very similar to the hit podcast Serial, they allowed people to looks through the documents and photos they were talking about in the podcast, it wasn’t needed but it just added to it. Also the on the website it would include the podcast because that’s another way to attract people to listening to podcast.

The donation part is what puts people off giving blood. A big needle in their arm for 7 minutes giving them loads of pain? No, a needle in their arm that’s pretty painless is the reality of the situation. This episode will illustrate the moment you walk in to your appointment to the end where you’re tucking into a biscuit and a glass of squash.

Interviews will be with people that work there, describing what’s going on and why people should donate and getting rid of the stereotypes so it encourages young people to go and donate.

This episode will follow the process of the blood being transported from the donation centre to the hospital that needs the blood. This is a crucial part that not many people think of but is the most important part of the whole process. Here I would follow a van driver, get them to tell stories and explain about the process.

Once you’ve donated your blood you get a text a few weeks later to say what hospital your blood has been issued to. Once I know where my blood has been issued I will go and see what it’s going to be used for and even interview the person that got to use my blood. Interviews with doctor’s talk about how important it is and how many lives are saved with blood donation and why they think young people should give blood. 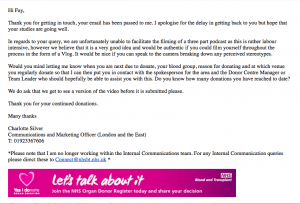 OUTRO: “…Do something amazing, Give Blood.” (music B Postitive Choir live from the MOBOs)

That was Fay Cross with The ABO’s of Blood donation 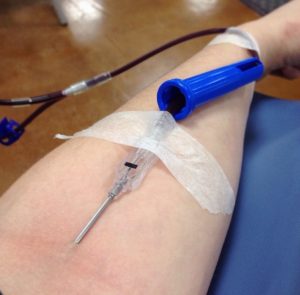 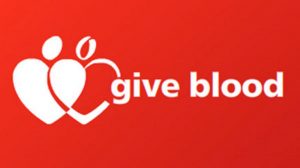 Are you a young person and want to start giving blood but are unsure of what goes on? A regular young donor Fay, takes you through what it’s like, listen here: https://www.mixcloud.com/FayCross/the-abos-of-blood-donation/