‘The Pleasure Gap’ between men and women is a gendered issue and is gradually changing. In a generation where online campaigns such as #girlswanktoo exist, women are using social media to encourage themselves to sexually explore their own bodies.

Treatment: This Documentary will aim to follow BBC values and will inform, educate and entertain a Radio 1 audience aged between 15-29 years old.

The audience will be exposed to a crude and raw reading from the number one selling book ‘Feminist don’t wear pink (and other lies)’. Grace Campbell’s extract from the poem (called ‘The  Female Wank’) will open the documentary and will follow with a short snippet of her interview of her own opinions of self pleasure.

The Documentary meets Honey Ross, the co-founder of the Pink Protest. A London born ‘community of activists committed to engaging in action and supporting each other.’ She explains how important the launch of the #girlswanktoo campaign was back in the Summer of 2018 and the aims and effects the movement is having on young women in the UK.

(Grace Campbell is a co-founder of the Pink Protest too) Grace’s previous interview then picks back up and she explores how the stigmas need to binned in order for society to change.

Education! It can be argued to blame, for the lack of knowledge of self pleasure. Therefore the presenter meets with TV’s Dr Karen Gurney, a clinical psychologist in sexual Health at the Havelock clinic in Central London. Dr Gurney analysis why sex-education in the UK needs a refresh and why young women need to be informed of the health benefits of self pleasure from a young age. 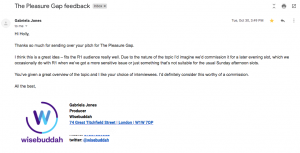 *This feature contains strong language and adult themes throughout*

OUT: “… Use the #pleasuregapdoc on social media, to continue this conversation.”

Images:  2nd image is the illustration created by Natalie Byrne, as spoken about in the doc and commissioned as by the pink protest for the Girls Wank too movement. 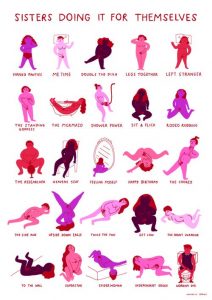 Ariana Grande – Thank you, next instrumental

Gavin and Stacey – Satisfaction with every erection

When Harry Met Sally – Faking it