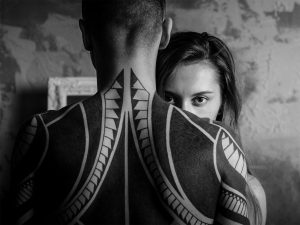 Body modification is arguably most associated with the extreme cases. These often include practices such as tongue splitting, eyeball tattoos, and scarification. But it doesn’t have to be that out of the box. In its simplest form, body modification means to deliberately alter you physical appearance. So in that sense, corset training and foot binding in China can be put in that category.

Tattoos and piercings can be seen as the starting point of body mod. I spoke to Nina, who only started getting her tattoos not long ago, Kiria who is further along in her process, and finally Raph who works in a tattoo and piercing studio that give outside the box sort of piercings.

In order to understand the extreme cases I started from the basics and it turns out its just people expressing a different form of art. They have ideas of how they want to look and they go for it. At the end of the day we all look different so why not embrace that?

From tongue splitting to eyeball tattoos, why do people carry on with these procedures? These aren’t just simple changes as most of them are irreversible. After starting her own her own journey into tattoos and piercings, Makee set out to try and understand what the addiction is and how to thread lightly to avoid regrets.

In: “Whenever we think of body modification…”

Out: “…at the end of the day you can do whatever you want with your body”

Photo by Jake Davies on Unsplash